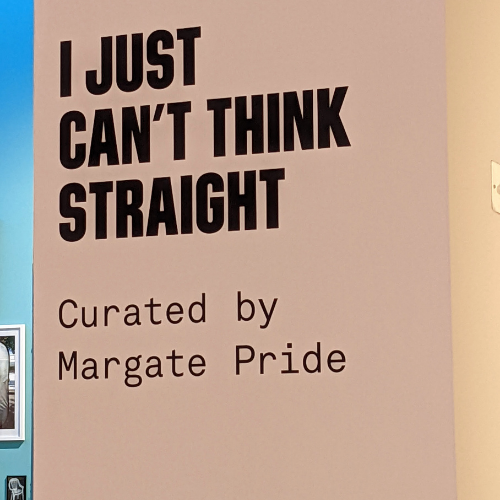 The Turner Contemporary recently celebrated its 10th anniversary with its Open Exhibition this year (which ran from the 23rd October 2021 to the 20th February). This brought together artworks from Age UK Thanet, Canvas 4 Equality, Margate Pride, and the Turner Contemporary Access Group. In my article in Issue 47, I wrote about visiting the rooms of two of these groups. This month I’d love to write about visiting the part of the exhibition by Margate Pride.

Margate Pride runs the LGBTQ+ pride celebrations in Margate every year. In a video on the Turner Contemporary website, Lo Lo No from Margate Pride describes the exhibition: “We were looking for works […] not only celebrating identity but also experiences of otherness and queerness, different perspectives. Images or narratives not necessarily viewed as normal or mainstream.” As well as the artworks: “Some very fantastical, lots of colours, lots of humour as well.” (https://www.youtube.com/watch?v=DhckRT5cgoM) All the groups appeared inclusive with a diverse range of people and that was reflected in the artworks.

In the exhibition, as I turned around the corner into the next room packed full of artworks, I saw the bold text ‘I Just Can’t Think Straight – Curated by Margate Pride’ on the wall. I stood and read the introduction to the exhibition on another wall ‘Through our selection of artworks, we sought out the queer and alternative […] materials and actions that spoke directly to our senses and experiences of life.’ Not only was the room and the artworks in themselves visually stimulating but I could hear music coming from an enclosed space within the centre of the room (from a short film) and the sound of a sign where the words changed every two minutes high above me. This collection did speak directly to the senses. The exhibits themselves were made of reused and recycled materials due to Margate Pride’s mission ‘to be a green pride.’ On several walls, there were spray-painted pink flowers creating a modern and current feel to the exhibition.

Among my favourite artworks within this space were:

‘Queer Joy Is An Act Of Resistance’ by Rachael House (acrylic ink on handmade cotton rag paper) – The artwork was created in February 2021. Drawn on the rag paper was a light pink box with purple and blue feather shapes and pink ones in each corner. In the centre in black the words ‘Queer Joy Is An Act Of Resistance’ were painted. Rachael described the idea behind it (in the artist statements and captions leaflet): “We’d gone through a year when Pride events were online, and LGBTQIA+ people were unable to gather together to celebrate in the streets. There was much talk on the news about families separated, but queer families, chosen families […] were not mentioned. Alongside queer rights being rescinded in many parts of the world, it felt like a kind of erasure.” I think so many of us can relate to the frustration of not being able to go to pride events, which did prevent queer joy in a time of struggle.