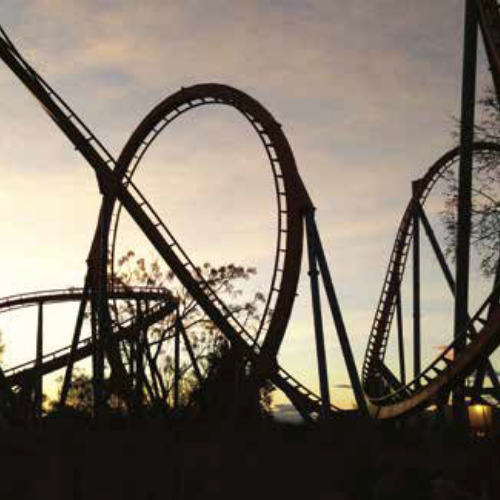 My friend Leanne and I had a great time at Thorpe Park Fright Night thanks to Student Life. A journey that should have taken an hour and a half, in typical M25 fashion, took much longer so that, by the time we arrived at the resort we had to tend to our stomachs first!

We were eager to try out the newest additions to the park that neither of us has tried before, so we headed to the Black Mirror Labyrinth which needs to be pre-booked via a QR code to get an allocated time spot. By the time we had done this around 1:30pm, the earliest slot available was at 7:45pm, so we booked this and went on our way. The first ride we went on was the Walking Dead ride (this was the only time of day that this ride had a queue time of less than 90+ minutes!). We thought this was a great ride to ease us into the day and didn’t upset our nice, full tummies too much!

The next ride we went on was Nemesis Inferno and whilst queueing, this was the first time we saw any element of ‘Fright Night’ with some spooky dressed up characters chasing the public around. We were keen to watch the seasonal shows – Birthday Bash and Legacy Fire and Light show as these were things that we wouldn’t be able to do if we came back to the park on a regular day. All the large rollercoasters had a queue time of over an hour and a half, so we were happy to eat our donut-sundaes and watch the preshow entertainment of the actors interacting with the audience.

Unfortunately, the 6pm Birthday Bash show was cancelled and, honestly, the fire and light show was slightly underwhelming. However, we did manage to catch the Flash Mob outside of Stealth which was amazing – it is only 10 minutes long, but I would highly recommend catching it! The dancers/actors were extremely talented and this was definitely a highlight of our day.

Overall, I would have liked to have seen more scare actors around the park to enhance the idea of ‘Fright Night’ but there was a lot on and it was an enjoyable day and evening!