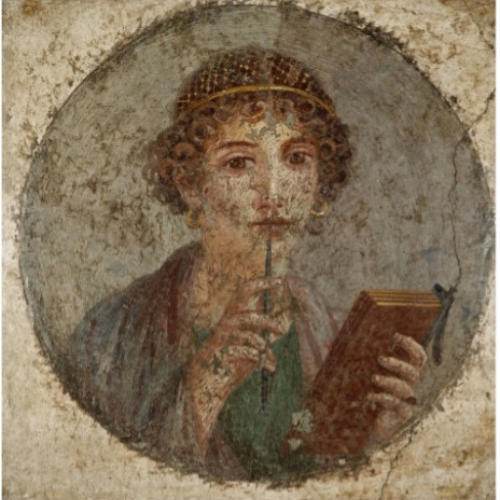 Need a new Muse? Why Sappho is worth a view!

Sappho was an ancient Greek poet that has transcended time and is still regarded as ‘The Poetess’ and ‘The Tenth Muse’ just over 2,600 years after her birth. She is known mostly for her intense descriptions of love and the beauty of her personality that is shown through her pieces. While not much is known about her life, we do know that she had a massive influence on many Roman lyric poets and 18th century romantic poets alike. One of my personal favourite poems of hers is:

This poem illustrates how Sappho was the first recorded poet to say that creating poetry makes the poet immortal. Her artistic skill and perception of the world rivalled many people on the Island of Lesbos in Greece and around the ancient civilisations of that time.

There are multiple legends around Sappho’s life. She was most likely born around 630 BC and had a daughter named Cleis; the same name as her mother, as it was tradition in Ancient Greece to name children after the child’s grandparents. It has been said by medieval scholars that she was married to a wealthy man named Cercylas. However, in a more modern translation “Cercylas” is closely translated to “Dick of Man.”
She is thought to have had three brothers named Charaxus, Larichos, and Eriguios. While it seems that young Larichos was her favourite brother, Charaxus’ experiences are scolded through her verses.

The word ‘lesbian’ originates from Sappho’s life and birthplace ‘Lesbos’. Just as her name became an umbrella term for women who like women, the term being ‘Sapphic’. Her love for women is seen many times through her work:

Unfortunately, the reason we only have fractions of her work left is due to conflicting views about her sexuality; it’s believed that one medieval Pope, named Pope Gregory VII, burned around 97% of her poems. It’s also theorised that Renaissance scholars destroyed her work yet blamed this destruction on the church. Out of a total ten thousand lines written, only six hundred and fifty survived; the longest one being seven stanzas long while the shortest is three words. Nonetheless, what we do have are the prodigious remains of her passion; the only poem of hers that survived in its complete and original form is “Ode to Aphrodite”.

While Sappho was a real woman in Greece, her title as ‘The Tenth Muse’ comes from a mythological tale regarding the Ancient Greek Gods and Goddesses. The Nine Muses of Apollo (the God of music) were the Goddesses of literature, science, and the arts; each of them associated with their own individual craft. Many other poets and admirers of Sappho’s work will refer to her as ‘The Tenth Muse’, the man coining the term being Plato himself. He believed that her creative pieces were so remarkable that they achieved an impeccable status of being able to rival the Gods.

Sappho wrote not just snippets of poetry to be read, but lyric poetry written with the intent to be sung by a single voice while music played with it. These were short melodies that explored many themes and subjects such as: love, desire, despair, marriage, religion, nature, wisdom, the goddess of love, the muses, and mother and daughter relationships. Reading her poetry truly allows us to see into her lively personality and the range of emotions she endured whilst writing.

The time, place and cause of Sappho’s death are unknown, but there are a few legends. One is that she leapt from the Leucadian rock to a definite death in the sea due to her fruitless love for Phaon, who was a younger man and a sailor. It’s also theorised that she fled the Island of Lesbos or was banished and went to Sicily to live the rest of her life there. Whatever the truth, she remains something of a living legend.

If you’re interested in the works of Sappho, Gay Pride Shop sells her book for £8.99. Their profits are shared with LGBTQ+ charities such as ‘The Albert Kennedy trust’ and ‘George House Trust.’

Stung with Love – Poems and Fragments of Sappho Book – www.gayprideshop.co.uk