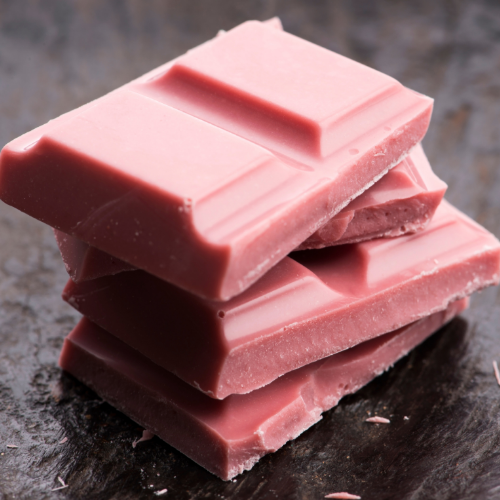 There’s this thing called chocolate. You might have heard of it. Until recently, it came in three major different forms, namely milk, white and dark. Friends can be made and lost over which chocolate you like the most or least. My sister won’t speak to me because I defended dark chocolate. The discussion became quite different for me when I first tried ruby chocolate however. Kit-Kat released a ruby chocolate edition a few years ago and this was before most people knew about it so I was amused to see a pink Kit-Kat assuming it was just coloured white chocolate. I was shocked to learn it was in fact something much bigger than that.

Ruby chocolate is just hitting the mainstream market. You can now quite easily find it in many forms: bar, ice lolly, hot drink and more. Many big brands have released products incorporating ruby chocolate which means Kit-Kat was ahead of the curve I guess. However, it’s hard to know whether this is just a trend or in fact a new mainstay of the chocolate world that the next generation will be shocked to learn wasn’t around when we were young kids.

It started being developed around 2004 and was first unveiled about a decade later in 2017. In the 4 years since, it has quickly risen in popularity. It has an almost sour flavour which is oddly reminiscent of berries and I guess you could say it takes up a new corner of the flavour quadrant. Milk is the standard, dark represents bitter, white represents sweet and ruby represents sour. I guess we’re just waiting for the discovery of salt chocolate now. Anyway, it’s also distinct for its colour which is a pretty vibrant pink considering its all-natural colour.

I personally enjoy the taste, especially in hot chocolate form, but I theorise that the chocolate’s presence as an aesthetic treat for the eyes is also a big contributor to success. In an age of social media moguls and Instagram stars, how pleasing something is to look at is extremely important for any product on the market. Companies can sell a million T-Shirts if they look really cool but actually don’t have very impressive workmanship or fit.

What is perhaps most impressive is this chocolate’s acceleration in popularity. It’s still not part of what I call the collective knowledge of society, for example that the three primary colours are red, blue and yellow, and I do know people who are unaware of it but Costa has released a whole new line of drinks with ruby chocolate as the key ingredient. Magnum has released multiple ruby chocolate products recently. It shows definite progress from when I was offered a ruby Kit-Kat and just stared back at my friend in confusion. Side note: don’t be surprised if that product sees a re-release now that it’s on trend.

It’s hard to predict whether this new product is just a fad. We could currently be at its peak with a steady decline around the corner. We could also be at the beginning of its slow but sure ascent toward being just as known as the original chocolate trifecta. In terms of flavour, it definitely offers something new. Its fruity sourness is quite unique and you can now remake any existing chocolate product but with an entirely new flavour. Ruby chocolate brownies are something I need to try as well as chocolate puddle cakes which is what my family calls those things where there’s just melted chocolate in the middle that oozes out as you tuck in.

I want to see ruby eggs on the shelf at Easter too with those pink noses on the chocolate bunnies made out of it also. I think that, as simple as it might seem, the novelty of a chocolate that is naturally pink is extremely fun and I don’t expect that to wear off for a while.

Arguably, a more important question is this: does it matter? And the answer is: no! Popular foods, drinks, clothes always come and go and then come back again and on and on. Most things these days see a revival only a few decades later such as the 80s which has been in fashion for what feels like a decade. Ruby chocolate is a fun new thing that might not be popular for long but is popular for now. They may not always sell ruby chocolate products in droves like they do now so let’s enjoy it while we have it.