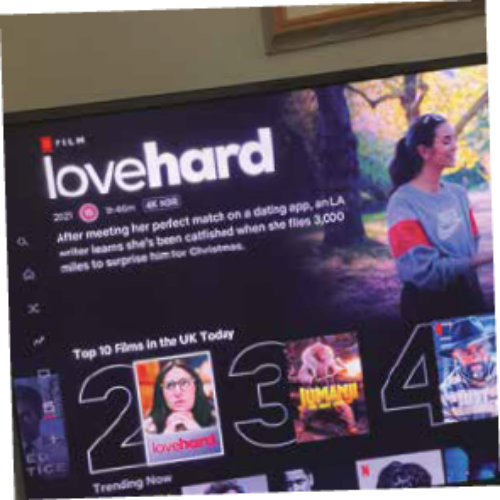 It’s only November, but I’m never one to

shy away from watching Christmas films

out of season (the first time I watched one

this year was early October), so I have no

qualms about writing a review on a new

Christmas film that was recently released

on Netflix. Starring Nina Dobrev (The

(Dobrev), a writer from L.A. who thinks

she’s met her perfect match on a dating

app, only to learn that she’s been catfished

when she flies 3,000 miles to surprise him

for the holiday season.

before its release, but I’d nearly forgotten

about it when my best friend, who lives in

Spain, suggested we buddy-watch it – and

I’m so glad I said yes! Having loved Nina

Dobrev as Elena Gilbert on The Vampire

Diaries I was excited to see how she

in love and somehow making a career

Considering she’d had so little luck in

love, but hadn’t given up hope and was

for this amazing person that she meets

online with whom she seems to have a lot

in common. There is an amazing sequence

early on in the film during which she’s

shown having an everlasting conversation

on the phone with Josh,

her gorgeous dream man, during which

she does a myriad of things while talking

with him. There’s one scene in particular

that I absolutely loved, in which they’re

as he reads a novel that her late mother

would read to her at night to help her

fall asleep; which I thought an excellent

I felt for her therefore, when she travelled

all that way to surprise him, only to

discover that he wasn’t exactly who she

expected and was understandably upset

and annoyed by the deception and the

truth that she had been “catfished.”

Despite this fact, Natalie stays and

– although his older brother (Shum Jr.)

doesn’t exactly take to her, and the movie

retains its wholesome element while

also taking on a comedic air that carries

through to the end.

What I love about the film is that it

combines romance and comedy with

the message that it’s always best to