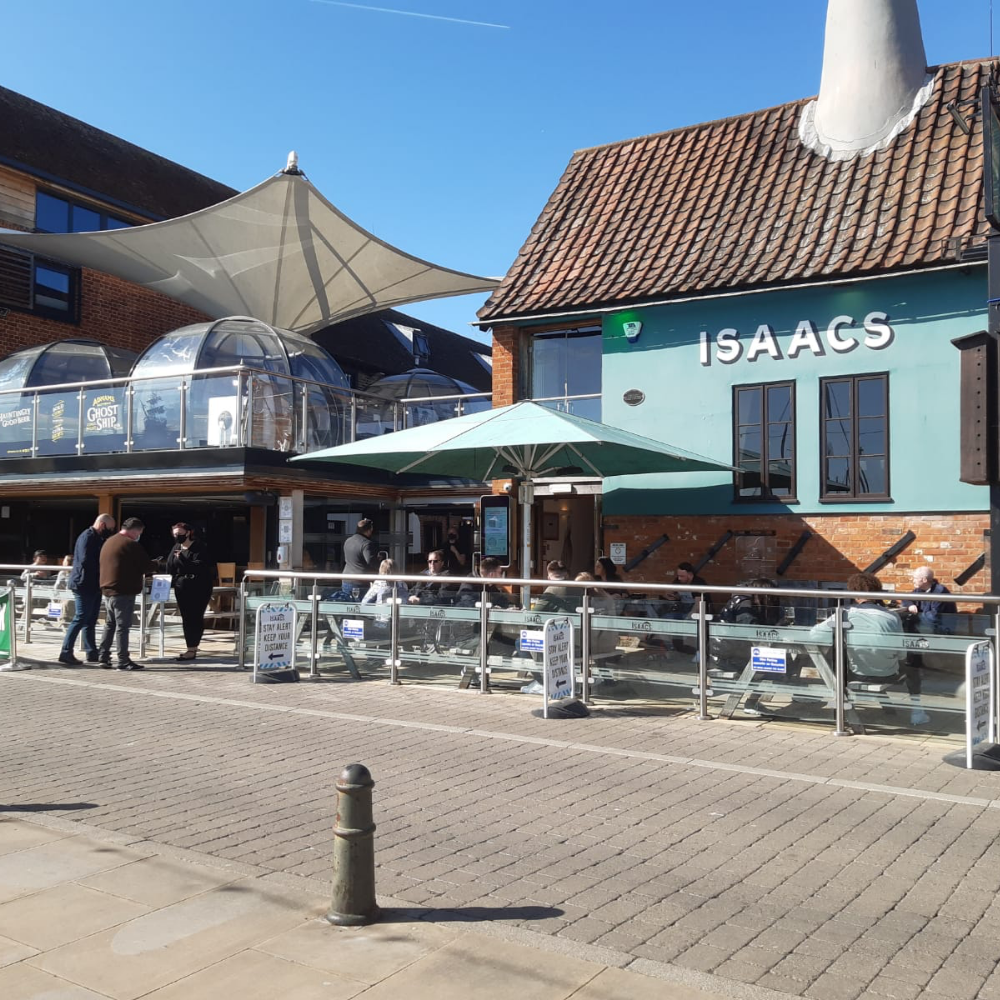 At time of writing, bars and pubs with large beer gardens / outside areas have been allowed to re-open and that includes Isaacs On The Quay which is effectively one very large beer garden. The location is very impactful even if you’re simply walking past like I have countless times before. However, stepping inside reveals that it’s even better than it looks.

The courtyard is extremely spacious and holds many tables and that’s not including the multiple balconies and tables out front that I hope to experience on future visits. For those interested in sports, there are 4 large screens suspended in the middle of the main area so that most seats have a great view and their lighting system, which includes countless strings of fairy lights and flame lights at the entrance, creates a beautiful atmosphere once the sun sets. It’s also wheelchair accessible which includes their toilets and those also happen to be very well kept for any germaphobes reading.

I can not attest to how the dining experience has changed at this bar in the last year but there has clearly been a lot of effort put into making it safe and easy. At the door, you’re greeted by a staff member who helps you check in either using the NHS app or a browser and they’re very calm about it which is great if you’re not very savvy with anything that involves a screen. I can not confirm or deny if I’m referring to myself. Additionally, masks must be worn when you leave your table and, like most food places at the moment, have a new online ordering system which only accepts card although you can use a card machine if you don’t want to pay online. As they aren’t a chain, they have their own independent website which you will also be directed to by the staff member at the door and it runs incredibly smoothly. It does time out if you’re on the menu for too long without ordering but once you go back onto the menu, anything previously in your basket will still be there so it’s just a minor inconvenience as opposed to a glaring problem.

As I had not eaten very much that day, I decided to use the opportunity to try a few different things from their menu. Initially, me and my companion ordered some fries as a starter and they were very nice. They still had the skin on them, which I learned from my friend can be a real deal-breaker for some, so be warned those who aren’t a fan of that. What these simple potato pieces made clear though was the incredibly fast and friendly service. They arrived within a couple minutes and meals we ordered later were estimated to arrive in 10 minutes but actually ended up on our table in half that time even though business had picked up by that point.

As a vegetarian, I still get dread opening a menu. I have nightmares of ‘veggie burger’ appearing with no other description and making my night out a game of chance. I was very happy to see that every category of food had a vegan option so I had a lot of choice plus they all had descriptions. I ended up going with the Mexican Halloumi Burger. I love halloumi and it’s very popular in the UK however I was excited to see what the Mexican twist would be. The burger comprised of a large halloumi patty, Mexican salsa, and nachos. The tortilla chips turned out to be really great in a burger and the mix of saltiness and spice tasted delicious. The burger came with more fries and a salad which had a dressing I wasn’t that fond of however that can be easily removed with the ‘Notes’ feature on their ordering system where you can ask for your food to be tweaked to suit your tastes and allergies. Finally, I tried a Vegan Cheese & Chorizo w/ Onion Chutney Panini which I would definitely recommend for a lunchtime order and they come with tortilla chips as opposed to fries and salad once again. I wasn’t bothered about the fries’ absence as I had eaten more than enough at this point.

OVERALL, I HAD A GREAT EXPERIENCE. THE FOOD DID INITIALLY SEEM QUITE EXPENSIVE HOWEVER I THINK THE QUALITY OF THE FOOD, AMAZING LOCATION AND CUSTOMER SERVICE ALL WARRANT THE PRICE TAG. IF I HAD TO REVIEW IT IN 10 WORDS: IT IS SO GOOD, I FORGOT TO TAKE ANY PICTURES.