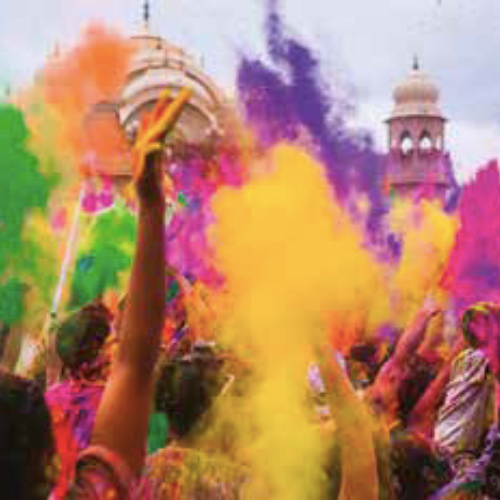 Around the globe many cultures celebrate various things. This may be all the way down to religion or national holidays. Each country and culture are different…

A festival celebrated by many folks of the Hindu faith and also the general population is Holi:

Holi Is considered a Hindu festival that celebrates love, spring, and new life. Many families hold ceremonies but for the majority Holi is about FUN! It’s a vibrant festival that consists of dancing, singing and also the throwing of vivid powdered paint and vibrant water.

Holi is known as the festival of colours Holi and is celebrated at the end of winter; this is normally the last full moon day of the Hindu luni-solar calendar month marking the beginning of spring. The dates for Holi are never identical. Holi normally falls in March, but it may also occasionally fall in late February.

The origins of Holi come from a mixture of mythology including the favoured legend of Hiranyakashyap. He was a demon king who wanted to be immortal. He wanted to be worshipped as god. His own son Prahlada chose to worship Vishnu rather than his own father, this offended Hiranyakashyap deeply. Hindus light bonfires on Holi to represent the triumph of good over evil

Holi appeals to me because it’s a vibrant, energetic two-day celebration of affection and colour. You see many festivals like Holi across the globe, but Holi is exclusive to itself.

Hanukkah is known as a Jewish holiday which celebrates the victory of the Maccabees over the Syrian army. It also celebrates a miracle that occurred during this time, where a day’s supply of oil allowed the menorah to keep a temple in Jerusalem lit for 8 days.

Hanukkah observes when the Greek empire had power in 2nd century Jerusalem. In 168 BC king Antiochus IV Epiphanes outlawed Jewish practices damaging the Jewish Temple by installing an altar to sacrifice pigs.

Hanukkah is observed for eight nights and days every year. it occurs between late November and December.