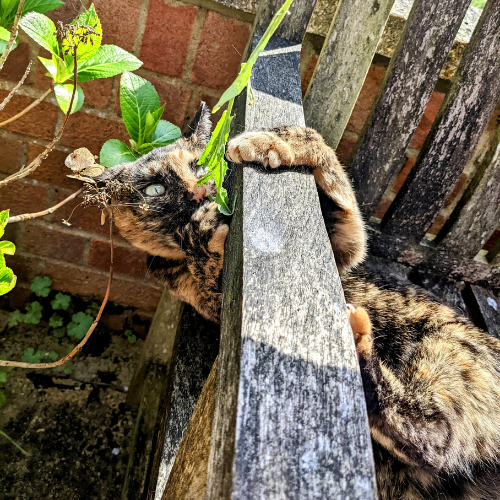 I watched you chase your tail around in circles

You never caught up with it.

Then you looked up at me,

so utterly confused and naive that

It was hard not to burst out laughing.

The hilarity of this mixed with

Becomes too much to bear.

One other time you stared at sunlight

Which danced on the ceiling.

I scrolled on my phone, and it moved slightly.

The light came down and taunted you.

Soon you were chasing it along the ground and

When the light disappeared, you looked around

The other day I heard you growl.

do such a thing ever before!

You prowled along the windowsill.

All of a sudden you remained quite still.

Poised to spring into action

But there was glass between

You and the outside world.

I peered out from behind the curtain

To see who else… but the postman!

Your protector mode must have been triggered.

I know you’d defend us with your life,

While never stepping a single paw outside!

I think the last poem I wrote specifically about cats was back in 2020 in a lockdown, which feels like a distant memory. Similarly, to the poem I wrote back then about the charming nature of cats and how they bring joy into our lives, this poem focuses on the quirks and naivety that cats exhibit. I dedicate this poem to my cat Apple who inspired it, as the protector and dog-like cat that she is – with a heart of gold but she believes herself the protector of the household. Actually, she once growled at the postman! Although the chances of her going outside and adventuring, like my other two cats, remains slim. This poem also explores the idea of cats being considered naive: innocent, with a lack of experience or wisdom however they just have quirks as other animal companions do. In fact, cats are highly intelligent animals, but we all love them for their quirks and personalities as well as their independent nature.