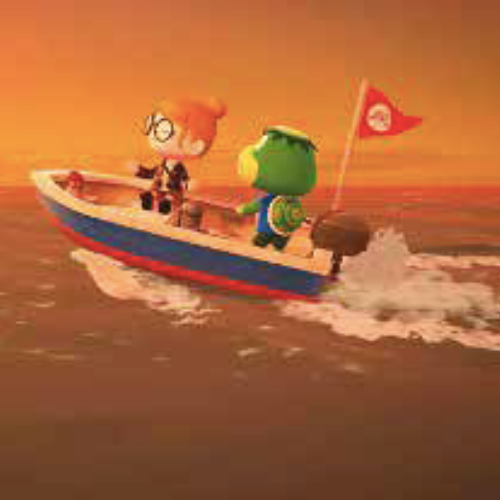 I’ve been playing Animal Crossing in some form or another since I was eight years old. It’s a game franchise that I hold close to my heart, so when the announcement came that a huge update was dropping for Animal Crossing New Horizons, I was beyond excited.

The update includes new hairstyles, DIYS, a brand-new cooking feature and recipes, and much much more. It also promises the return of previous NPCs such as Brewster, Harriet, and Leif to name a few. The game brings both new and old players together in a way that continues to evolve and expand its gameplay.

So, if you’re new to the game, or only just getting around to playing the update, this is what you’ll want to do first.

To unlock Brewster’s Coffee Shop, you’ll first need to talk to Blathers at the museum who suggests finding Brewster and inviting him to join the museum. As I found out, unless you do this first, you won’t be able to find Brewster when you sail to the islands.

2. SAIL TO THE ISLANDS

Head down to the docks to find Kapp’n waiting in his boat. It’ll cost you 1,000 Nook Miles per trip, but hopefully, you’ll find Brewster on your first few tries.

When you get to the island, you’ll notice some new additions. See those holes in the ground? Dig them up to find gyroid fragments! Take them back with you, plant and water them, wait until morning and you’ll find a gyroid. These are from the older games and a fun addition to have in New Horizons. If you’re lucky, you’ll find yourself on a crop island filled with wheat, pumpkins, tomatoes that you can use in recipes (but don’t worry there are other ways to get the crops on your island!)

You’ll soon find Brewster wandering around one of the islands. After talking to him you can invite him back to your island. Then, when you next talk to Blathers he will announce that the museum will close for a day to build the new shop. Once the building is complete, when you head into the museum you can find Brewster’s up the stairs on the left-hand side. As in previous games, you can sit and buy a cup of coffee. I haven’t gotten that far yet, but I imagine as in other games, if you buy a certain amount of coffee Brewster will offer you a job making coffee for your island residents!

There has also been an expansion on Harv’s Island, a place I rarely went to before the update. Harv explains that he wants to create a community of merchants on his island.

Now, old NPC characters and their services can be unlocked for 100,000 bells each. The first one I unlocked was Leif’s cart as I hoped that I could purchase crop starters from him – and I was correct! I currently have potatoes and wheat growing on my island and I cannot wait to start cooking.

Other vendors include Katrina, Harriet, Redd, and Kicks. I definitely think it’s worth saving up to unlock these NPCs as you can more easily purchase artwork from Redd to complete your museum, Harriet gives you bonus hairstyles, and Leif lets you buy crops instead of waiting for crop island to spawn.

The main feature of the new update is the DLC – Happy Homes Paradise. I preordered the DLC straight away as I enjoyed playing Happy Homes on my Nintendo 3DS and wanted to experience it on the Switch.

After heading to the airport, you can fly to a remote island where Lottie is waiting to recruit you as part of her team. She offers you the chance to design homes (interior and exterior) for island visitors according to a theme. I really enjoyed designing my first home and found it to be quite therapeutic! If you like designing rooms and fancy switching off whilst doing it, the DLC is worth it.