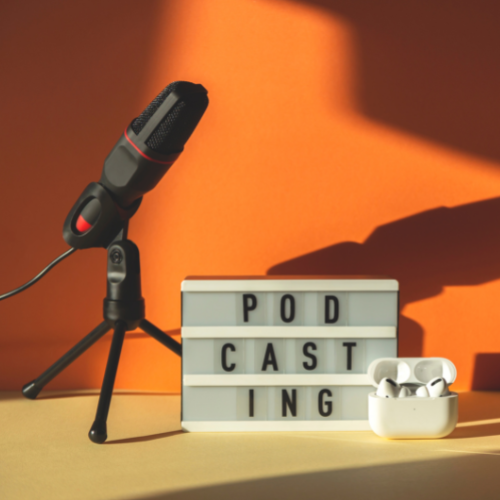 It has taken me a while to track down an asexual and aromantic centred podcast but I have now found one! A OK is an american podcast which talks about everything to do with being asexual and aromantic. Every week on the podcast Courtney Lang interviews people who are on the ace and aro spectrums. The podcast’s description reads ‘Remove all that pressure to “prove” something unprovable, and instead listen to really cool people discuss coming out, fandoms, their hobbies and passions, and more!’

In this article I’ll be looking at some episodes of this podcast which stood out to me. There are 71 episodes of A OK so I picked out my favourite five episodes. The first thing I noticed when I started listening to the podcast was the intro music – which is from the song A OK by ÜberKicK. The main lyrics we hear are ‘I feel the way I should and I hope you find your way. I already feel… A OK, A OK, I feel ok!’. They couldn’t have picked a more apt piece of music, especially for a podcast named A OK.

Episode 5: Less Complicated Than You Think

‘We meet Alex (she/her) a writer and Twitch streamer who identifies as demisexual and demiromantic/lesbian and is also autistic.’ Alex starts off with saying that “demisexual means I’m attracted to specific people that I know well”. Essentially demisexual means experiencing sexual attraction only when you have formed a emotional bond with someone, similarly demiromantic is only experiencing romantic attraction when you have formed a close bond with that person too. Alex found out late on what sexual attraction actually means, having assumed it was aesthetic attraction that others felt (when someone appreciates the appearance or beauty of another person). Alex goes on to say the main thing that has changed since coming out is a feeling of understanding herself better. The main assumption people seem to have is that: everyone likes sex and experiences attraction the same way – which of course is entirely untrue, everyone experiences attraction differently.

‘Emery (they/them) is a social worker who is asexual, quoiromantic, and queer.’ Quoiromantic is being unable to understand romantic attraction as a concept or as a feeling. It can also be not knowing whether you experience romantic attraction or not. Emery starts off by saying they are a “sex repulsed asexual” and have “never had a desire to have sex” in their life. This is also known as Apothisexual. Emery goes on to say that they have had romantic and queerplatonic relationships (more on that later) which have been sensual and physical but not sexual “those are lines that are hard to draw”. I think people have yet to realise the vast range of attraction someone can experience, not just sexual and romantic. To which Courtney replies “Because you are the only one who knows your sexual orientation”. In terms of Emery being sex repulsed, the thought of things of a sexual nature seems weird and can cause discomfort. It’s important to clarify this is on a personal level and sex repulsed individuals don’t care what others do. At first Emery found exploring the aromantic spectrum the hardest in terms of discovering their identity and working out what attraction they felt. Realising that they were quoiromantic was like saying to themself: “It’s ok that I don’t know.” Later on in the episode Courtney asks Emery how they would define a QPP (queerplatonic partnership): “…a committed relationship that does not have a romantic or sexual component.” Emery clarifies there are different levels of QPPs, there are QPPs between life partners with kids for example. A QPP is a relationship where you share a stronger emotional bond than in a friendship.

In this episode we meet Ry Irene (ze/zir), ‘a [non-binary] drag king and spoken word poet’ who is ‘panromantic and grey asexual/demisexual/autochorisexual.’ Ry says ze is able to find anyone of any gender aesthetically attractive/ be romantically attracted to them (panromantic). The orientation I haven’t heard of ‘autochorisexual’ means ‘having sexual desires but not projected onto a person’ – so the thought of something being more attractive than in reality. After ze found out zir friend was asexual Ry started to realise ze was also asexual. “Labels don’t have to be a thing but also I think it’s important as a person, for me, to know who I am… I’m not 100 percent asexual, there are [different] degrees to that. This is the conversation that needs to be had.” Ry goes on to say it’s ok to find that stuff interesting without having to be involved in it. Ze clarifies that ze might want to look like someone, without wanting to be involved with them in that way (in terms of aesthetic attraction). Onto my favourite question asked in the episode – how does the drag world interact with being asexual? Ry replies that being involved in drag has made zir more sure of zir asexuality. “I’m still part of the Queer community [as an ace person].” In college [university] Ry loved spoken word poetry and when ze moved zir friend took Ry to a drag show which was really enjoyable. A couple months before starting drag properly Ry had started taking testosterone and started on zir gender discovery journey, so it also allowed Ry to explore zir gender as well. At the end of the episode Ry says “Drag is an art of gender expression.” – where people from all genders take part.

Episode 21: Under the Ace Umbrella

‘Mars (she/they) is a cat mom and library graduate student who identifies as biromantic and grey-asexual (and possibly grey-romantic).’ Mars starts by defining biromantic as experiencing romantic attraction to two or more genders, although some people describe it as liking a similar gender to their identity and one different, but as they are still figuring it out Mars goes with the first one. At 14-ish Mars realised she was ace when friends talked about [intimately] being with an attractive person they saw and Mars didn’t relate to it. “There’s this societal pressure as a teen to be wild and give in to your rebellious side… and I wasn’t comfy with that.” Courtney adds after Mars’ comment: “If you are not ‘giving in’ to this [pressure] then you are [viewed as] naive. It’s also hard to get people to understand how you feel and that you don’t care what they are doing.”

Episode 45: Ace and Aros are LGBTQ+

‘Sherry (she/her) is a future law student who identifies as asexual and aromantic. Sherry begins by describing the comfort that comes with the ace and aro labels for her personally and in knowing there are others out there who identify similarly. She started identifying as asexual at 18 but was not sure of her sexuality, although she was aware of the Split Attraction Model. For those who don’t know, the Split Attraction Model is ‘a framework [which] says there can be a difference between someone’s sexual orientation and their romantic orientation.’ (https://www.verywellmind.com/what-is-the-split-attraction-model-5207380) It can be helpful for understanding ace or aro-spec identities but some people find it too confusing or criticise it (see article link). What I found really interesting was Sherry describing this fight or flight response where she would not want to experience romantic things or force herself into them and not enjoy them. This made it easier to work out her aromanticism before later discovering her asexuality. “I remember having a crush on this guy, which was reciprocated, and asking my mum ‘do I have to act on this/ go out with this guy?’ – looking back it makes so much sense.” It’s important to know that asexual and aromantic spectrum identities are in the LGBTQIA+ community – literally in the ‘A’ in the acronym! Sherry also addresses the ‘A is for Ally’ argument: “the A was created for aromantics, asexuals, agender people… a lot of it is to do with the assumption that ‘A’ is for ally when people don’t know [the A identities in the LGBTQ+ community]. “Allies, we see you and we love you but the A is for us.”

You can listen to the podcast here: https://www.aokpod.com/