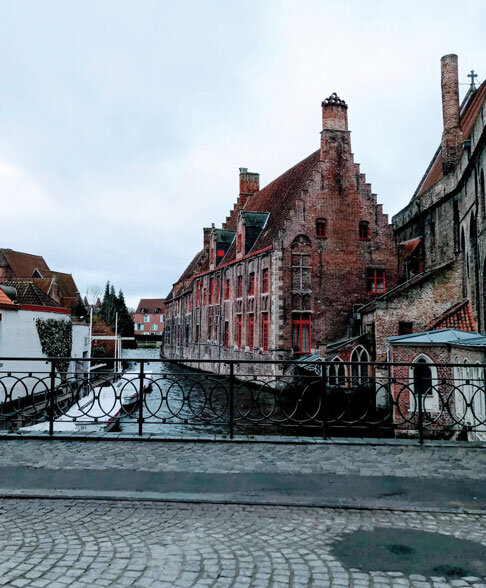 In December I embarked on a two-day mini cruise from Hull to Bruges accompanied by my partner and parents. We spent two nights onboard the ferry and sailed to Bruges overnight while we slept, waking up in Belgium the next morning. We then took a coach into Bruges from the port and continued our journey on foot to experience the Christmas Markets during the day.

Before this trip I had never been on a cruise before and it was only my second time ever on a boat having been to France previously as a kid (which I barely remember). The boarding onto the ferry was very straightforward, we arrived with our bags and handed over our tickets and passports much like at an airport. We then made our way onboard the vessel, retrieved our keys to the cabins and unloaded our bags. Initially, I felt fine onboard the ship, although the low ceilings did make me feel slightly claustrophobic. I expected to feel more motion sickness than I did, but it still added some discomfort to the journey.

After settling in a little, we then proceeded to have dinner on the ship, paying for a buffet which was quite delicious, with options such as a roast dinner, curry and noodles. For the rest of the evening we made our way to the lounge deck, enjoying a few drinks and playing cards into the night. Then came the challenge of sleeping on a swaying ship… and let me tell you, it was not the best experience. It was hard to adjust to the movement as a sufferer of travel / motion sickness, but I did manage to get a few hours sleep the first night. In the morning we awoke at 7 am with an announcement from the captain that breakfast was being served. Everyone enjoyed a cooked breakfast before disembarking into Bruges that morning! We then made our way on foot to the coaches that would drive us into the city centre to experience the Bruges’ Christmas Markets.

I must confess, I was shattered and slept the entire way on the coach so cannot comment much on the sights! We got off the coach after about twenty minutes and begun an uncertain walk into town, as no one had a clue where they were going. Eventually we found the town and began looking into shops at the displayed Christmas decorations and food that a lot of them contained. Everywhere was incredibly beautiful! The old buildings and Christmas decorations really made it feel like a winter wonderland. We wandered into the market square and started looking at the market stalls that contained a variety of things, such as jewellery, Belgian chocolate, hats and scarves. There was a really nice atmosphere at the markets with the smell of chocolate and food making it feel very Christmassy.

After seeing everything that the markets had to offer, we decided to do a little museum tour whilst we were there. We visited the Historium and took part in an exploration of the Historium Story, which took us on a time travel trip to medieval Bruges. We were taken around seven historical themed rooms with an audio guide leading the way, with medieval backdrops, film, music and special effects. After enjoying the tour, we then decided to head back to the market square for some lunch and a pint. There was plenty of places to choose from, as the restaurants surrounded the market square. We then headed back to the Historium to travel up the Tower, which was amazing but exhausting! Once we had climbed the 145 steps, there was an impressive 360˚ view of the Market Square and the Belfry, which was the highlight of the trip for me. After descending from the tower, we made our way back outside to revisit the market before heading back to the coach pickup spot, when we were blocked by a parade! It was a nice surprise and added to our enjoyment of the day.

Overall, I enjoyed the experience but would most likely avoid travelling by boat again largely due to the discomfort of motion sickness. I also found that the day was quite rushed when we were in Bruges as we were trying to fit in as much as we could. Unfortunately, this was a massive disadvantage as we had limited time, as most of the time was spent in transit onboard the ship. Once in Bruges, it was fantastic! So perhaps… go for a longer cruise or fly instead if you are wanting to visit Bruges.