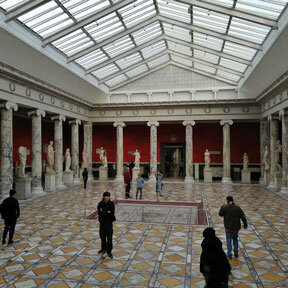 Last year, sometime in June, myself, my boyfriend and our two friends made the sudden and rash decision to go on holiday to Denmark over the New Year’s period… because why not? I honestly believed this dream would never come true, however the existence of this article means it obviously did.

This was my first holiday without having a parent with me. Unlimited freedom! At least until I realised I would have to save money to get there, have a place to stay and generally exist. I was pleasantly surprised by how cost-efficient we managed to be. I only spent around £500 for the whole holiday including flights, accommodation and spending. But believe me, we spent way too much money on food whilst we were there… like the true students we are!

Airbnb can be hit or miss, however we were lucky enough to find an amazing flat that was functional but also unique and homely. I managed to resist the temptation to swipe the owner’s rainbow fox cloth that covered an entire wall. Now that we were settled in, rainbow fox thoughts put safely at the back of my mind, we were set to exploring the area. Copenhagen may not be a tropical island but its locals have a different kind of charm. All the buildings are quite spaced out and a lot of the older buildings in Copenhagen Central had this blue-green colour to them due to the metal oxidising – like the Statue of Liberty.

There are a few museums to go to as well. One of the museums only exhibited statues, and it turns out… there are a lot of statues throughout history.

Interestingly, the ones we visited weren’t Denmark-specific, but instead focus on world history. The National Museum of Denmark was dubbed ‘Tyskland’ at the time and focused on German history. The piece of the Berlin Wall they had was perhaps my favourite item from any of the museums we visited.

I was slightly scared about food as I am vegetarian, and the internet had scared me into believing the Danish only had meat delicacies. I was pleasantly surprised to find that all food places had at least one vegetarian option and most places had several. Danish falafel has changed my world view on English falafel and the aptly named shawarma-shop Mr Shawarma was a favourite of mine because of its falafel wrap. The sauce tasted disgusting on its own but somehow tasted sublime paired with the rest. We did have a lot of home cooking too (mainly courtesy of my boyfriend) and we discovered pancakes are a gift to mankind. They’re quick, easy and versatile and we ate 5 different kinds in the 9-day period alone: plain, cheese, tomato and chive, Nutella and brownie (we had no tray for the brownie mix we bought so tinkered it ever so slightly to make some brownie-pancake hybrid things that were delicious).

We also did a lot of things that you can very easily do here in Blighty. Eating McDonalds, hanging out in the woods, going to the cinema and a lazy day were all part of our Denmark experience and I wouldn’t have it any other way. This was a bit of a living holiday. We ticked a few tourist check boxes but we tried to act like we were living there permanently, just without the annoying things such as taxes or mortgages.

Then… New Year’s Eve came. It was perhaps the most eventful and mishapridden day of them all. After a rather calm day walking around, we planned to spend the evening in Christiana. However we discovered that the scene was well… nonexistent. We re-strategised and decided that Copenhagen Central was the better location as it was tradition that everyone went there to see in the new year. Though after days of fast and constant public travel that made travel across the city easy as pie, the system finally decided to imitate its English cousin, then all trains were MIA. I think it took hours and many failed plans to finally get (with my phone conveniently dying) to the packed town square.

This was my first time ever properly celebrating New Year so I wanted to make it special. Like a true example of my generation, I captured some of the fireworks on video which were lengthy, unrelenting, and varied (with some of the fireworks being almost worryingly close to the ground!). I must admit, I practiced my kiss beforehand, because accidentally head butting my dear partner was a very real possibility. Despite the hardships, that night was one of the best in my life and I felt, maybe for the first time in my life, like I was a true adult. I might even make Copenhagen a regular thing as I enjoyed it so much.