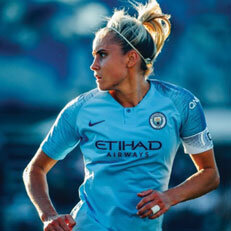 “I have more media duties; I really enjoy it because I like trying to inspire people” Steph Houghton MBE

I think we can all agree that she inspires everyone, especially being the captain of the England team and captain of the Manchester City women’s team. I think both managers have made the right decision by making Steph the captain and she is the type of person that is a good role model to all the young girls who want to be a footballer like Steph. She has made it clear that nothing will hold her back from doing what she loves. “Ever since I’ve been able to walk. I’ve always had a ball at my feet” and it’s not about to change. Steph is determined to continue to inspire the next generation of women’s football stars, making sure they don’t just have male role models. This will inspire women to get into playing football so they can also make a difference to people’s lives and hope that one day they will be a role model for the next generation.

For most people like Steph, the start of their career might have led to some discrimination towards them. I think that many people did that because people thought that they weren’t very good, but she wanted to continue to play and prove those types of people wrong. During most of the England games recently, Steph and the rest of the team have proven that women CAN play football and they are just as good as men. Steph has had two big injuries, but they haven’t set her back.

She said “I think women should inspire. It’s our duty to inspire young girls to play a sport, whether it’s just for enjoyment and keeping fit or to actually go on and try and make a career out of it”

Last year Houghton helped launch City’s #samegoals initiative, in which girls are encouraged to upload a video on social media showing them scoring a goal or making a save, then each one is then sent a football by the club.

Houghton became a UEFA women’s football development ambassador in March 2016, which was shortly after she received an MBE.

“I think it’s important to be you and to stick to your morals, values and your standards and that’s how I try to live my life”.