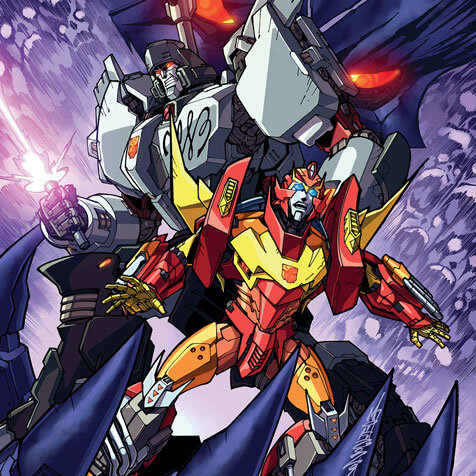 We all know the war between the Cybertronian Transformers: the hateful, cyber-supremacist Decepticons, and the protectors of the innocent, the Autobots from the movies. But what happens when four million years of war ends, and the two sides have to find their way in this new universe. One group of Autobots decide to journey across the galaxies to find the legendary Knights of Cybertron, said to hold all the secrets of the transformer race. The Autobots hope the Knights will restore their war-ravaged home world to its former glory but the knights haven’t been seen in hundreds of millions of years and despite the end of the war the universe is still full of danger.

These ten volumes follow the crew of the spaceship: The Lost Light, which are made up of some of the most unknown Transformers such as Rodimus, Brainstorm, Skids and more which gives the writers more freedom than characters like Bubblebee. The character development and intercharacter relationships are developed in great detail so that you really get to care for the characters while fearing for their lives. More Than Meets the Eye also features some terrifying villains such as the reoccurring Decepticon Justice Division. The DJD are a group of Decepticon radicals that refuse to accept the end of the war, who hunt down traitor Decepticons while slaughtering anyone in their way.

All this is thanks to the British comic writer James Roberts who had experience writing other Transformers titles for IDW such as the Last Stand of the Wreckers. Though the art occasionally changed with guest artists visiting the series, the main team of penciller, colourist etc. do a beautiful job of illustrating the story of the Lost Light. The entire creation team does an amazing job making this series which was my first introduction to Transformers comics. I would advise those who wish to start reading Transformers comics to read More Than Meets the Eyes, a series of 10 volumes that I have now read multiple times and that I am currently rereading upon writing this review. There are many different indie comics and lesser known publishers outside Marvel and DC Comics that create amazing stories and More Than Meets the Eye is a great place to start reading.