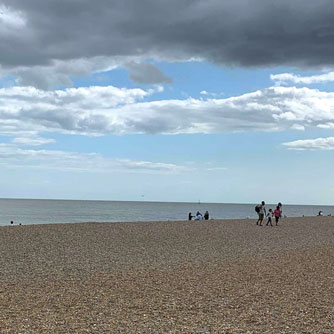 The environmental issue is a subject that should concern everyone due to the fact that only by discussing the problems and taking precautions will manage to have an impact on saving it. Being part of the young trustee of the library we had the opportunity to go to a festival called Siren Festival in Aldeburgh, which has the environment as their primary concern.

The moment we got there, the volunteers greeted us and introduced us to what was happening. From different talks to small experiments, the atmosphere was incredible. The rooms where the magic was happening were decorated in ocean colours and they had big balloons shaped as different ocean creatures; from dolphins to octopus’, squid and whales.

We listened to talks about the three most frequent waste products that humans produce, then we experimented with small projects to discover how life underwater is and which species have more advanced hearing than humans.

They were based in 3 different areas; the beach is one of them. Here they had s small cabin where you could hear stories and other interesting information about the environment. It was my favourite part as they had like a postcard office where you could write a card to thank someone, or to express feelings, concerns and the moment I finished my card I felt more like I was freer, and I enjoyed all process.

All area was full of people who were enjoying the festival and were so determinate in trying to create the environment a cleaner place. Being for the first time in this area I had a few moments on the beach, just listening to the water as it was so calm, it was giving me such a good vibe.

Being there made me realize that I should be more careful, that the change comes from us as it is up to our choices to change the way we do things for the environment to be cleaner.

I was brought up with the idea that everyone needs to take care of the environment, but I never thought it can have such an impact of we do not do so. From now on I will be more careful about how and where I throw away the waste as this festival opened my eyes about it.