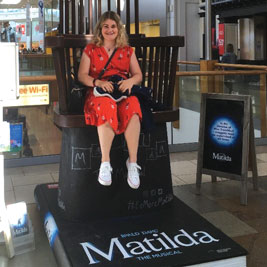 On the evening of Thursday 18th July, I saw Matilda the Musical at the Theatre Royal in Norwich. This was a present for my birthday and I was excited for the performance.

I read the book Matilda when I was a child and remember feeling enchanted into another world with a character who enjoyed reading books just as much as I did growing up. As a young girl growing up and learning life lessons, it was important to have a person, despite being fictional, to relate to.

Matilda the Musical is perfect for anyone who wants to relive their youth. The show was colourful and lively with wonderful songs that will make your heart content. The memorable song “When I Grow Up”, sang by the kids, signifies how children perceive adulthood. The young actors in the performance were incredibly talented throughout and it is clear that they will continue to strive within theatre.

The film of Matilda also makes me feel nostalgic and I vividly remember the chocolate cake scene with the character Bruce Bogtrotter. In the musical, this scene is re-enacted flawlessly and, in my opinion, was one of the best scenes because of how entertaining it is.

There wasn’t much I disliked, I thought it was acted splendidly and most of the set design was magical too, especially the song sequence with the swings. However, I did think the show could have explored Matilda’s powers further as this was only exposed in one short scene, compared to the film which highlighted her special abilities in several different scenes. Additionally, the set design could have featured the chokey, Mrs Trunchbull’s malicious method of discipline, as it was mentioned throughout the act on numerous occasions.

Matilda was on tour at Norwich Theatre Royal until Saturday the 17th August. It continues to run at Cambridge Theatre throughout September, I encourage any musical lover to definitely go and see it. Overall, I think Matilda the musical is a wonderful fun-filled show for everyone to enjoy and would truly make anyone feel young again.