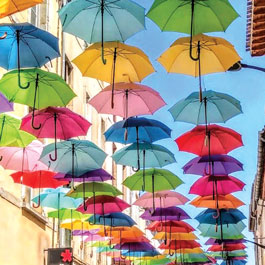 Back in June, I flew into Carcassonne Airport for a long-awaited holiday. My parents had organised it as a treat for their wedding anniversary, inviting friends and family to join them, though everyone else had left when I arrived. I actually liked this, as it meant it was a relatively quiet house despite friends from Menden in Germany being there for one of the two weeks I would be spending there.

The views from the house, both from the terrace and the first room I stayed in were gorgeous, with the Pyrenees Mountains in the far distance, there but not seen unless – according to local folklore – the following day would bring bad weather, though we could see the foothills. You could also see the vineyard fields, for the Oupia area is famous for its brewing of wine, all around and another smaller village not far in the distance, and all these views gave me a distinct feeling of Déjà vu as it looked so much like Umbria in Italy.

Oupia, the village we were staying in, in a gorgeous house is a beautiful little place with medieval streets and houses. There was a little shop-come-restaurant five minutes or so down the road that my mother would occasionally visit to buy croissants for breakfast and when it acted as a little restaurant there would be music from wonderful musicians. The house itself had cool white walls inside and out and had four bedrooms, one of them at ground level with immediate access to the house’s pool which was heaven during the hot weather while I was there. The nearby town, on a Tuesday (as far as I know, this is only during the early summer months) holds a market with stalls selling all-sorts; clothing, jewellery, dreamcatchers, knick-knacks and antiques etc – there was even a part of the market that sells food!

Then of course there was Cité de Carcassonne, the main attraction. The citadel was amazing and so full of history; the signs of the stores within the citadel written in old text to fit in with the medieval feel even though the shops themselves didn’t give off that old-world feel and the views from behind the walls of the citadel were gorgeous. The new part of the city, on the other side of the citadel via a wonderful bridge is a cornucopia of shops and (sometimes) markets much like in Oupia’s town, with brightly coloured umbrellas hanging high above the bustling streets; open upon my visit.