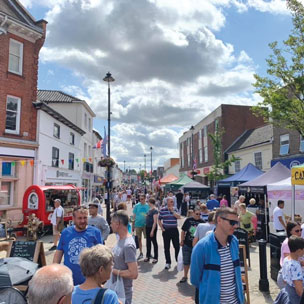 On Sunday 7th July, Stowmarket Town Council hosted their second Food & Drink Festival. Following the success of their first festival in 2018, this year was set to be bigger and better with more stalls and more variety of food & drink available. The streets started to fill just after 10am, when the festival officially opened, with some stalls selling out of products by 2pm!

The stalls included a mix of street food to enjoy on the day and a variety of food and drink to take home and enjoy later. The majority of stalls sold items from Suffolk including gin from Stowmarket and sausages made in Newmarket. You could also find a range of foods from around the world such as Polish sausages and different curry pastes. Not only were there different savoury foods to try, there were also lots of sweet baked treats such as donuts, cakes and ice creams.

There were a range of activities available to take part in on the day, including a kitchen theatre at the John Peel Centre with chefs from local restaurants such as The Grazing Sheep in Ipswich, and children’s activities for the whole family to be involved in such as circus skills and decorate (and eat!) your own cupcake. Also at the John Peel Centre, there was an opportunity to enjoy some locally produced gins in their pop up gin bar! The team created a secret chef competition for the event which involved collecting stickers from each stall which had a toy chef on show. On returning their leaflet, completed with all nine stickers, the entrants would be in with a chance to win a family ticket to The Regal Theatre in Stowmarket.

It was a great opportunity to be part of the team organising this event, specifically helping to promote the event through creating various marketing materials and getting the word out through social media. It was also a very enjoyable event to work at on the day, meeting lots of members of the community and gaining vital feedback from all of the stalls. This was a very successful event for Stowmarket, bringing lots of people from around the county into the town and enjoying some of the great things which Stowmarket has to offer.