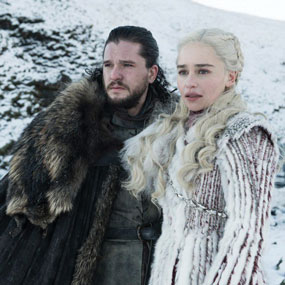 One of the most anticipated series of the year, the final season of Game of Thrones aired for the last time. Being herald as one of the best T.V series of this century, most fans expected a spectacular and epic final season but that isn’t exactly what happened.

The past few seasons haven’t felt the same, perhaps this was because the creators stopped following the books after Season 4. Many times, it’s obvious that the dialogue doesn’t seem to fit in, it feels too modern and it seems that the writers are quite lost. There have been some good episodes since Season 4, but during Season 7 and this season, it became apparent how bad the writing truly is. It’s interesting that people are only realising that the writing isn’t as good now when it concerns their favourite character when it has been like this for years.

There had been several leaks during this season, which definitely didn’t help and with only 6 episodes, it seemed like they wanted to fit everything in. The poor attention to detail has been quite obvious, one massive blunder was during Episode 4 when a Starbucks cup was left within shot during the celebratory dinner scene. The writers have seemed to ignore many things they set out during the past seasons – Jaime’s character development was one of the most prominent, dying alongside his twin sister whom he deserted for the North by getting crushed by a ceiling no less. In Episode 3, it seemed that the Dothraki Hoard were all killed by the Army of the Dead and yet they appeared in Episode 5. The mistake of Gendry’s name (Waters – Rivers) is also a stupid blunder. It seems that the creators would rather have epic, fire-breathing dragons burning down cities than logic.

However, I do have to say that the cinematography was still as stunning as ever and really made this season. The soundtrack of this season was simply wonderful and Ramin Djawadi is a complete music genius. Some personal highlights of this season were the sequence in Episode 2, even if it was foreshadowing many of the deaths to come in the next episode.

There were a lot of parallels and nostalgic moments to previous seasons as well as some great reunions during the earlier episodes – Theon and Sansa, Arya and Jon, Bran and Jaime. Arya killing the Night King was incredible and although unexpected, really worked! Brienne FINALLY becoming a knight was also wonderful.

Some notable performances were Lena Headley as Cersei and Alfie Allen as Theon, two of the best actors on the show still managed to amaze me after 8 seasons. Arya’s scenes during Episode 5 were really powerful, seeing the true destruction of Daenerys’ rampage and Maisie Williams is such a great actress.

One thing I really didn’t enjoy during this season was the reaction to Daenerys. Using a POC’s death to further a white woman’s story of ‘darkness’ is never a positive thing. It seemed that Daenerys going dark was always going to happen, but the creators couldn’t represent it in a way GRRM could. Perhaps they were originally rooting for her but have been told that she was always going to be dark. Some fans are very hypocritical, when one character went through trauma they were criticised (Sansa? Theon?) but it’s fine for Daenerys to be angry. At first, they wanted her to ‘burn them all’ like her father but then they were criticising the show because it was apparently bad writing and didn’t make sense to her character that she would burn the city.

She has been hailed as a feminist icon by many but what I find interesting is that she has never been purely ‘good’, she burns people alive, she ‘saves’ POC and then still lords over them, she decides who deserves to live or who die, she says she won’t be like Cersei and then to goes about things the same way or even worse, she believes because it was her birth-right she deserves the iron throne without any care for anyone else, she blames other people when it is her fault for her actions, she tells Jon not to tell everyone who he really is because he is a threat and she knows people would rather him to rule, she is the epitome of a white saviour and she is a destroyer of society, which was certainly demonstrated in Episode 5. And without her dragons, what really is she? The only good thing is that the characters finally saw her for what she really was.

It’s interesting that a lot of the main characters ended up where they wanted to be at the beginning. Sansa becoming Queen in the North was probably the best ending for my favourite character and I couldn’t be happier. Although the Starks splitting up once again was sad, what was the point of ‘the lone wolf dies, but the pack survives’?

Was I disappointed with this season? No, I wasn’t, I knew it wouldn’t be the greatest season ever. It was always going to be underwhelming because it was so hyped up. The past few seasons have demonstrated that. But as Ramsey Bolton once said, ‘If you think this has a happy ending, you haven’t been paying attention’.