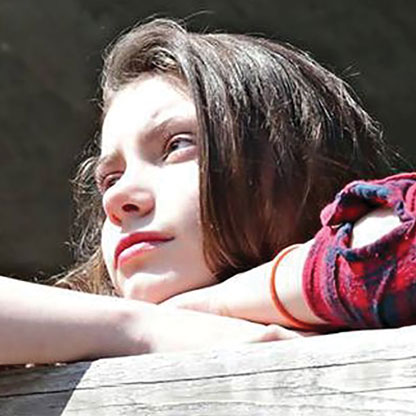 Most 13 years old, teenagers are normally found hanging out with their friends or on social media. For one teenager from Ipswich, Roma Manteiga-Nicholson, stage name Roma, you will find her actively promoting herself and raising funds for local charities.

In 2016 Roma’s mother Rosa, volunteered for the Ipswich Winter Night Centre and Roma, wanting to help decided to use her talent of song writing and singing to record a 3 track EP called Welcome to the Waterfront with all the sales money going to support the Night Shelter. She set herself a target of raising £2000 and released the EP at Sailmakers in Ipswich in June 2017. By the end of that year she handed over a cheque for £4500.

In January 2018 she travelled up to the NEC Birmingham to the finals of the Open Mic UK Songwriters’ competition. She was one of 6 finalists from all over the UK from 10000 entries. She didn’t win but received highly commended for her entry Father, a story about grief and being a homeless teenager.

Highly influenced by Ed Sheeran and Adele, Roma began writing her debut Album Teen Spirit in January last year. In total in 2018 Roma performed at over 97 events including on the Ed Sheeran Stage at Ipswich Music Day with her band and at the Christmas Light Switch on in November, forging her own career as an inspirational and amazing songwriter aged just 13. At the end of 2018 Roma had raised £6660 for three amazing local charities.: EACH Children’s Hospice, The Ipswich Winter Night Shelter and 4YP Suffolk mental health for young people project.

This year she’s raised an astounding £1300 for 4YP, who have been fundamental in her recovery from Bullying. Her fundraising and performances bring cheer and enjoyment to many young and old but alongside it Roma has endured physical and verbal bullying, which has seen her change school in year 8. The support received from 4YP has been invaluable and Roma now attends their Girls Group every Monday. With the bullies determined to knock her down, she responded to look for inspiration closer to home in the shape of Ed Sheeran who was also bullied as a youngster and at least 2 songs on the new album “Why did you hurt me?” and “Stronger” are in defiance of those who tried to break her spirit.

Roma said: “I could have just sat there and taken all the grief from the bullies and let them win, and whilst at first I found it self-destroying, and it nearly broke me, I knew I couldn’t let them win.”

Roma loves nothing more than raising money and hearing money drop into her donation pot. To her it’s a clear indication that what she is doing, raising awareness about the charities she supports, and her talent are uniting people. In fact, Roma firmly believes that music unites everyone and that’s her mantra #letmusicunite.

Roma loves performing and it doesn’t matter if it’s a small event like a school fête or a bigger event like Felixstowe Carnival. She performs either with her dad’s band, guitarist or as a solo act. It doesn’t matter to Roma where this all takes her. It’s doing something for others and inspiring others to do the same that’s important. For the time being she is happy to donate all the money from sales and performances to local charities. She has a lifetime to perform and earn back something for herself when she is older.

Roma is fortunate that she comes from a very creative family, both her parents are musical and Daddy D as he is known, performs in two local cover bands and Mum Rosa was once a singer herself. Both Roma’s parents help Roma with her song writing.

“I’ll often come home with a melody in my head, sit down and play it to Dad on the piano and we work out the best arrangement. I then add lyrics to my melody and if I need further inspiration, I will ask mum or my official photographer Chris Silvester who is a published poet and lyricist to help me. I started song writing when I was 9. We are lucky to have a home studio to record ideas”

Roma is an active member of Stagecoach Performing Arts School Ipswich and has been attending since the age of 4. She’s appeared as a dancer in local professional pantomime with Celebrities like Paul Daniels, Maureen Nolan and Tracey Beaker. She performed her West End stage professional debut as Young Princess Fiona in the UK Tour of Shrek in 2015 aged 9 and one day hopes to either be a performer in theatre or a singer songwriter.