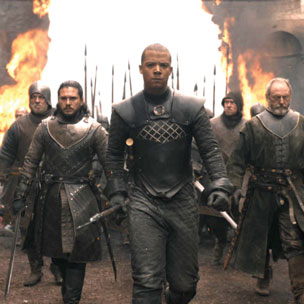 Army of the undead, white walkers and the night king! Season 7 left us on the edge of our seats. A year on and season 8 kicked right off. I’ll recap some of the most significant scenes and put in some of your reactions to this season finale.

EPISODE 1 ended with Sam revealing to Jon Snow that Daenerys is actually his aunt. This would not be the first time in the show where we’ve seen incestual love. I’m talking to you Cersei & Jamie.

EPISODE 2 the power rivalry between Sansa & Dany for the North gets heated. A warming moment between characters as they gather to have a drink and catch up with each other before the long night ahead.

In EPISODE 3, viewers were hooked. The battle between the living and the army of the undead was a well executed piece of film artistry and production, from the fire and ice breathing dragons, to the Unsullied & Dothraki with swords on fire. Melisandre (red witch) appeared to tell Arya Stark her destiny to “shut blue eyes” (Night King’s); the tables had turned.

Arya managed to stab the Night King, shattering him into ice along with his entire army. Characters who died in battle included, Sir Jorah, Theon Greyjoy & young lady Lyanna Mormont.

Episode 4, Dany insists to Jon on concealing his lineage to protect her position as queen. This doesn’t stop Varys from discovering & spreading the rumour; he later paid for it with his life as Dany sentenced Varys to burn ‘Dracarys’. Danearys & Jon headed to King’s landing but is ambushed by Euron Greyjoy’s armada who slays Rhaegal, Danny’s 2nd dragon. I almost cried.

Last Sunday’s episode 5 Dany went off on a rampage sparing no lives for the people of King’s Landing or Cersei & Jamie.

(As the best episode of this season) “because of the high profile of deaths” Daniel De Putter.

“Daenerys has always been a psychopathic… burning and killing people” Ben Grundy.

“The memes were good” Sammy Santos.

The moment where Arya emerges from the ashes. Nothing ever kills this girl. Yet viewers are anticipating the end as the show remains enticing.