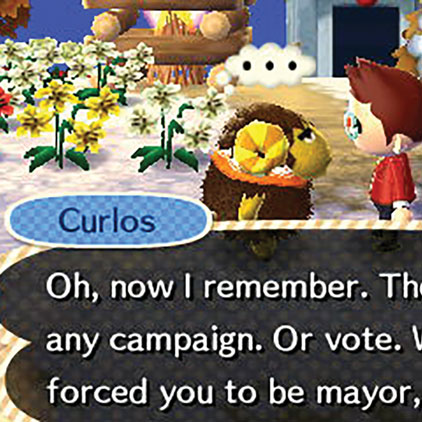 The Animal Crossing franchise is a beautiful series of simulation games from Nintendo.

The series has been running since 2002, appearing on the GameCube, original DS and the Wii. Just before a new version of the franchise comes to the Nintendo Switch later this year, let’s delve into the latest iteration in the main series: New Leaf. My goodness, what a game.

If you’ve never heard of the Animal Crossing franchise, it’s essentially a colourful, rosy, happy setting in which you are the only human character in a world of cute animals. All colours of the rainbow are represented here, so no worries about that. In this edition, the game throws in a twist – you’re the mayor! You hold all the power in the whole town! You’ve not been elected, but don’t let that stop you influencing the lives of your friends and neighbours. Ooooh. Power.

Admittedly, your power only stretches as far as to authorise the construction of monuments and buildings, along with having the ability to control the market conditions (shop opening times, the cost of goods, etc). Also, if you hate someone’s clothes, you can tell the Town Hall clerk to force them to change them. So that’s cool.

Having a thriving economy in your town is the key to success here. I have over 10 million bells in my bank account (bells are the currency). You could say I’m a bell-ionaire. Good ways to make money include selling fruit, fishing and catching bugs. There’s something really relaxing about these things, and in fact the whole game. I think the game is a really effective form of escapism. It’s so nice after a stressful day at university to sit on the train or bus home and be transported to the idyllic setting of my very own town. You’re completely immersed in the life of your character and the customisation of the town. Hours can pass by without even noticing; games this good should come with a health warning!