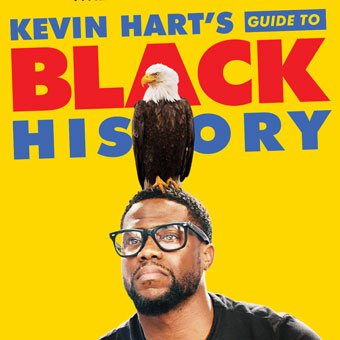 Comedian Kevin Hart informs the audience, as well as his fictional friends and family, about the forgotten contributions of black history’s heroes along the years through a series of sketches.

In a nutshell, this Netflix Special is a fresh and inexplicably educational show that teaches the young, and even the old, something new. Even though the length time of an hour seems draining, the time passes through the numerous short sketches and makes it a very easy watch.

There are plenty of cameos throughout the sketches such as Tiffany Haddish (Girl’s Trip) and Tom Kenny (SpongeBob SquarePants). It cleverly balances comedy with education so we don’t feel bombarded with too much information. There are also breathers from the education where we are just with Kevin and his family, which are also comedic.

It never feels like a history lesson, but instead, more like you are watching a play. You discover people such as Henry ‘Box’ Brown who escaped slavery by being mailed away to Pennsylvania, which led to him becoming a public figure and abolitionist speaker in the United States. A younger audience may find the narration over the top of the sketches easy to ignore, but they would be drawn to the visuals and the characters.

The release date of this coincides with Black History Month which is celebrated in October in the UK. Although don’t let this put you off as you can watch this Netflix special at any time of the year.

Since it is such an easy watch, you can simply listen to the stories without the visuals to go along with it. The acting from Kevin is satisfactory although the acting from his fictional daughter is rather stiff, although, as I said, it is watchable. The costuming and makeup while portraying the different heroes are bearable and don’t distract from the narrative. Set design for the sketches is excellent in establishing in which era they were set. Although it is obvious they are on a set and not on location, but this adds to the sketch feel and is excusable.

In a nutshell, Kevin Hart’s Guide To Black History is a fresh take on a history lesson and is a necessary watch for everyone.