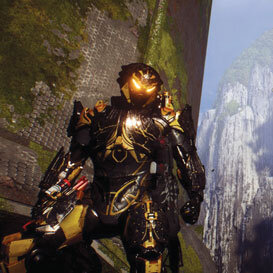 If you’re in the loop of gaming, you will have definitely heard of 2019’s development scandal – Bioware’s Anthem. Released worldwide on the 22nd of February and available on Windows, PlayStation 4 and Xbox One, Anthem was set to be a huge success. The action RPG plays as a third-person shooter and takes place on an unnamed planet, troubled by ‘cataclysms’ (rifts caused by the world’s energy, the ‘Anthem of Creation’) that spawn powerful enemies. You play as a ‘Freelancer’, a hero fighting to keep the Anthem out of the hands of the evil ‘Monitor’. Freelancers can control four ‘Javelin’ mechanical exosuits: ‘Ranger’ (all-around soldier-style play), ‘Storm’ (mostly airborne with control of the elements), ‘Interceptor’ (agile and close-quarters melee attacks) and last but not least, the ‘Collosus’ (a slow but tanky front-liner). These differing playstyles make the game interesting to play as there’s something for everyone.

As well as the larger differences in Javelin types, the exosuits are also heavily customisable; players are able to change not just the equipment and abilities their Javelin has, but the armour types, paint finishes, decals and more. Because the game is published by EA and therefore available on the Origin store, microtransactions
are in place for these items, but are not necessary as in-game currency can also be earned and used.

Fighting monsters on another planet and keeping a powerful energy away from a villain whilst looking like a robotic hero sounds like it can’t go wrong, right? Think again.

The gameplay demo was shown at E3 2018 and showed a much more detailed version of the game, with more interactions and choices that impacted the game as well as a more rewarding loot system. The general consensus on the game’s release was that the gameplay felt repetitive and unrewarding. The main storyline had substance to it, yet most other missions were repeats with dialogue changes; I couldn’t help but feel disappointed with Anthem on the whole. The world that Bioware created felt intriguing to a point, but it still felt rushed and sparse. That being said, the reasoning behind the faults are understandable and with reports of a major overhaul coming in the future, there is hope of a turnaround similar to that of Hello Games’ No Man’s Sky.