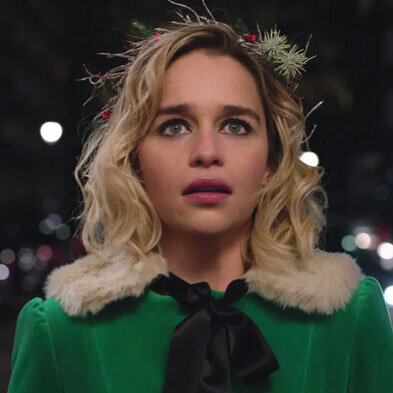 Promising to be a film “inspired by the music of George Michael”, Last Christmas is a classic -style, wholesome festive romcom where a troubled woman called Kate, who works in a year-round Christmas shop, learns to accept her life and overcome barriers after meeting Tom, an intriguing figure who may understand her better than herself. We went along to watch Last Christmas as both seasoned Christmas film critics and fans of George Michael – here’s what we thought!

Last Christmas fits perfectly into the category of an easy to watch, slightly cheesy, but heartening Christmas film. Despite some attempts at character development and cultural references, the film mainly focuses on Kate and how she finds herself again after falling into a dark place.

While the movie is named after Wham!’s hit festive song, I thought that Last Christmas missed the mark of embracing George’s music. Although certain songs work, sometimes it felt as if they used songs for the sake of including them and Kate’s connection to his music was seldom explored. They could probably have replaced half of the soundtrack with non-George Michael music and it wouldn’t have affected the story.

Though I’d recommend Last Christmas as an enjoyable film with a sweet moral, I can’t help but feel that they could have integrated Michael’s music more into the story, as well as developing loose ends.  3.5/5

Last Christmas is a heart-warming, yet confused, new Christmas classic. It’s big on heart and soul and any viewer will be firmly in the Christmas spirit after a watch.

Whilst Kate faces failure in her singing career she is guided by Tom, a kind-hearted man who loves nothing more than helping others, to see the true meaning of the season. Their relationship was beautiful to watch grow.

Now, as a George Michael fan, I struggled to see why his music was included. The story features occasional references to the fact Kate is a huge fan, such as her poster-lined bedroom, but as Tee says, the film would function just as well without the music. It feels like a shallow ploy to get George’s fans to the box office.

That said, would I recommend? Of course I would. I loved Last Christmas for its flaws, and it’s definitely got me in the Christmas spirit! 4/5