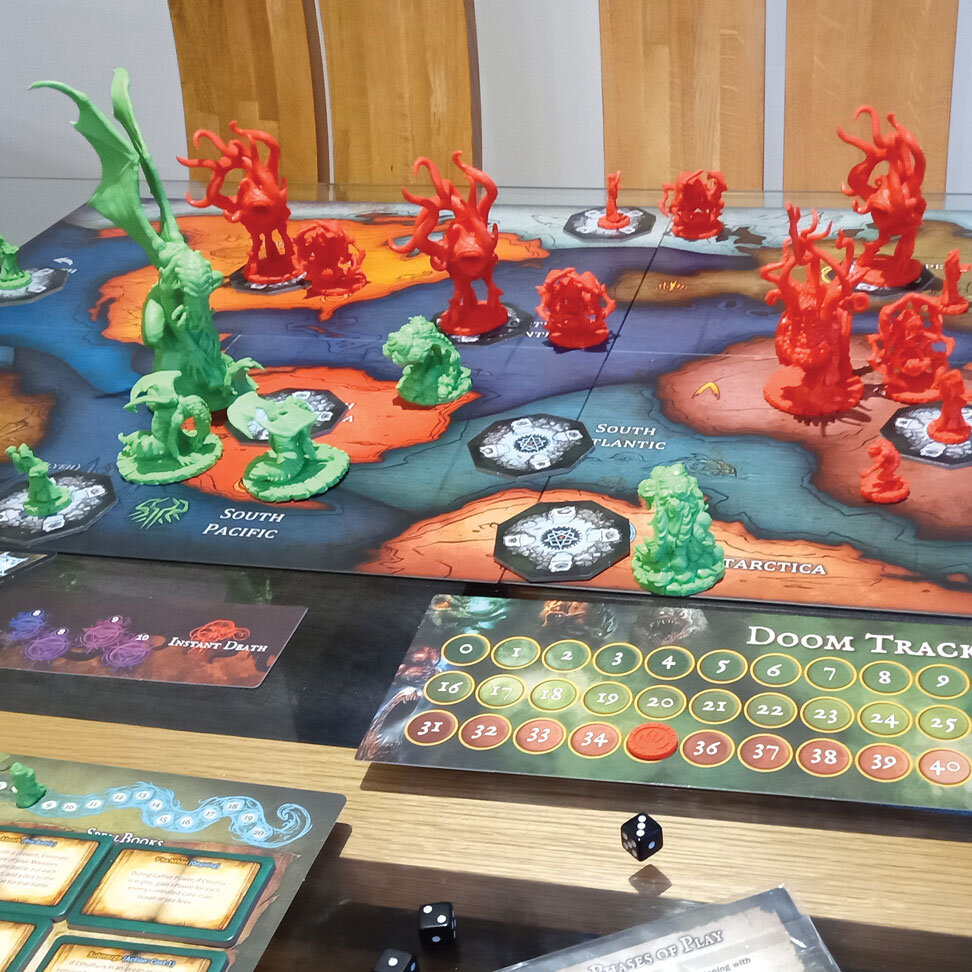 I’ve heard whispers in my dreams “Ph’nglui mglw’nafh Cthulhu R’lyeh wgah’nagl fhtagn”: the sunken city of R’lyeh rises, the Great Old Ones stir, and they come to bring DOOM to the world. Who will dominate the world; will the Old Ones have to share, or will humanity survive these eldritch horrors?

Cthulhu Wars is a board game for 2-4 players (up to 8 with expansions) where each player takes command of the forces of a Great Old One: Hastur, Cthulhu, Nyarlathotep, or Shub-Niggurath. The Great Old Ones are eldritch horrors created from the mind of H. P. Lovecraft, the father of classic science fiction horror. The aim of the game is to collect your six spell books by completing objectives that are unique to your chosen Great Old One. To win you must also bring doom to the game board which represents the world by building and holding ritual sites all over the world which the factions can fight for control.

The greatest appeal of the game are the miniatures that represent the cultists, monsters and Old Ones that each faction can use. Some of these miniatures aren’t quite so mini being the size of your hand while others are the size of a finger. All of the figures are greatly detailed which leaves some with delicate areas requiring care when being handled. Other pieces such as tokens, boards and others pieces of the game are well designed on strong material making it worth the hefty price tag attached to the game.

The rules and gameplay are relatively easy with a well-designed rule book containing examples to help explain the rules of the game. I was able to play against my partner who had no knowledge of the game prior and they picked it up by the second match despite changing to different factions with new special rules. I found it to be an extremely fun game (despite losing twice) especially for someone with an interest in the Cthulhu Mythology, so be prepared for madness to take hold and beware the yellow sign!  4/5

I played Cthulhu Wars for the first time against my partner Henry the other week and I really enjoyed it. The first game we played I chose to command Cthulhu, as unlike Henry, I have a very basic understanding of H. P. Lovecraft and only really knew one of the characters: Cthulhu. The second game I played as Nyarlathotep, a character I know virtually nothing about other than their name. However, despite my lack of knowledge of the game or its rules and characters, I won both games.

What makes Cthulhu Wars a great game is that I didn’t feel disadvantaged by my lack of knowledge. It is a game that I picked up pretty quickly as it is turn based, so you learn fast what to do to win. Each game took around an hour to complete, but it didn’t feel like a long time as we got caught up in the game, having a lot of fun trying to beat each other. The part I enjoyed most about the game was completing the objectives to receive spell books which then meant I could unlock monsters to defend my cultists and conquer more of the world. I also really liked initiating battles against the other team as you roll to see how much damage you inflict upon them which can sometimes mean their defeat.

We definitely plan to play Cthulhu Wars again soon as we both really got into the game and didn’t want to stop playing. It is a game you can play time and time again as you can change characters and strategies.

If you play tabletop games, you are sure to enjoy Cthulhu Wars. You too will find yourself desperate to unlock monsters and receive spell books to conquer the world with Lovecraftian doom. But, if you don’t gain all six spell books before the world reaches doom, the humans win, and you all lose!  4/5