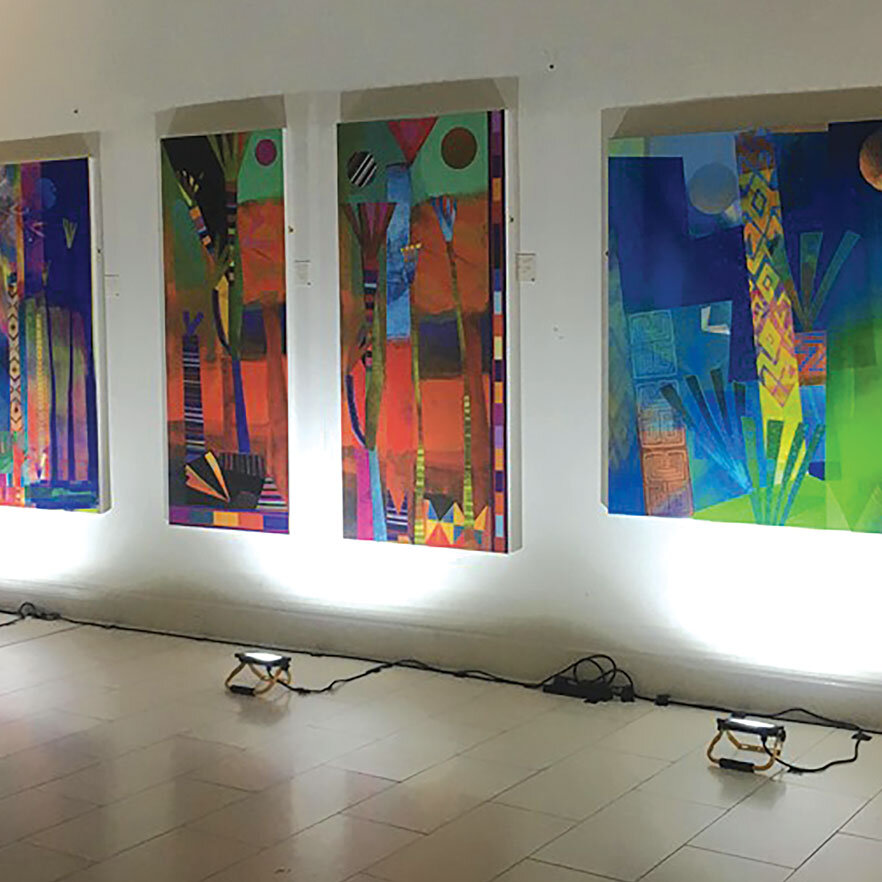 On the 19th November, for one of the first times ever, an exhibition of art was held at the Suffolk County Council Offices in Ipswich, Suffolk. The event featured the colourful artwork of Stuart Morris, and was held for the charity Suffolk Mind, a non-profit organisation close to the Chairman, James Finch’s heart. Suffolk Mind’s focus is on helping the mental health of those in Suffolk, with particular attention on 40-60-year-old men, and the farmers of Suffolk.

In terms of the artwork, hung on the walls were huge canvases displaying a huge variety of both Morris’ newer and older pieces.

My first thought was that the bright coloured patterns appeared to be quite childish, but after reflection I found that this was, perhaps, the best quality of the artwork. I found that his use of mixed media, in which he took a photograph, often of the Suffolk coastline, and added bold shapes of his own artwork scattered in the world. In pieces such as ‘Circus of Barra’ 2015, Morris managed to add a splash of playground colour to the mundane world that we know and are used to. Perhaps if we all saw through the eyes of Stuart Morris, our world would seem far less mundane, as the tiniest specks that anybody may see as inconsequential, really pull the pieces together, making life’s usual grittiness seem undeniably beautiful.

In many cases he managed to take mundane objects, such as poles and even flowers, and change them into something fresher. ‘My Flower Garden’ 2019 was my personal favourite canvas displayed. It truly exemplifies that there is a delicate balance between the real and the imaginary, a line that Morris chooses to explore, the usual vivid, animated flowers of our reality are cast into a bright white, the only part of the canvas that is without colour. It brings your attention to the delicate petals whilst simultaneously alerting the viewer to the beautiful colour that our world is home to.

As a first for the offices, the exhibition was a true success, raising money for Suffolk Mind, and allowing the mundane to regain its life. Perfectly summed up, Morris stated that “I can’t give you any explanations, I just hope that you enjoy the artwork.”