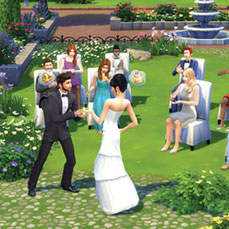 As a massive Sims fan, I’ve enjoyed every generation of the game that has been released so far, even the Facebook edition that’s sadly no longer available. Yet, it wasn’t until recently that I’ve played the Sims on its original platform; PC.

This is mainly because I have always been a console player with PlayStation being my favourite platform to game on. So, when the Sims 4 came out for PS4 I was really excited to play another generation of this game. However, I was actually disappointed with the console version. Don’t get me wrong, The Sims 4 itself is a great game, the upgrades that have been made to it is really nice to see but playing it on the PS4 has its downsides. First of all, the gallery function is not available for PS4 players. This means players can’t download any of the content i.e. if you see a house built by someone else you like you can’t download it into your game, but you can share what you’ve created (which I still quite don’t understand).

Another thing I was disappointed with was the fact you couldn’t use cheats! Well, you could but if you did you wouldn’t have been able to reach 100% on trophies and achievements. This element I can understand if you want to get the achievements and trophies but who doesn’t love to use a good cheat on The Sims? I eventually stopped playing it on the PS4 and ended up watching people on YouTube who played Sims 4 on PC and watched how they built their homes. This really drew me in to the PC version more than the PS4 and on a whim I needed up purchasing the PC version of the game. I have to say I enjoy the PC version so much more than the PS4 one. Everything is much easier to do in terms of building, controlling my sim and just enjoying the game overall. I am so glad I chose to convert to PC for this version of The Sims and has made me enjoy playing the series all over again.