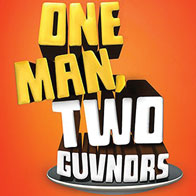 Richard Bean’s One Man, Two Guvnors is the updated tale of Carlo Goldoni’s 1746 comedy The Servant of Two Masters which has been reinvented into the show we know today. Set in 1963 Brighton, we follow the misadventures of Francis Henshall as he finds himself employed by two governors. We discover that one governor, Rachel Crabbe, is a woman in disguise as her dead twin brother Roscoe. She is seeking money from the father of the girl Roscoe was to be married to so that she can flee the country to be reunited with her own love. However, Francis’s other governor happens to be Stanley Stubbers, the man who killed Roscoe and who is also Rachel’s lover. This tail is intertwined with ingenious slapstick, passionate romances, and well-placed musical numbers.

One Man, Two Guvnors was showing at The New Wolsey Theatre during September and I was able to catch a viewing. I found that from the very start of the show and all throughout that each character was easily disguisable. It was clear that every actor had devised their character’s mannerisms down to a tee. Someone who particularly stood out to me was Richard Leeming playing the role of Alfie (an elderly waiter who is often victim to many blows and falls), as he upheld difficult body language without fault whilst still being convincing in his character.

Amongst the many melodramatic moments of the show I can say that Philip Tomlin, who portrayed Francis Henshall, made some of the most comically pleasing moments. Considering this was his first professional stage job, he certainly brought the audience a lot of joy and certainly did justice to the role.

Each costume and set design added to the mood and period of the show. I felt that the costumes especially represented the characters’ personalities accurately.

Although I felt that the slapstick was executed in a tasteful manner which I and much of the audience enjoyed, at times certain jokes may have been too repetitive and some of the dramatic monologues were a little too drawn out.

Overall, I can say can the show kept me entertained and captured in the story. Energy and charm were upheld throughout the production and I would be thrilled to see it again.