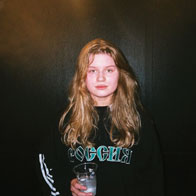 Cavetown is a twenty year old singer from Cambridge, England. The young singer creates songs about love and loss in some of the most beautiful songs I have ever heard. His indie style music sets him aside from other aspiring artists, having a calm and relaxed feeling to his songs whilst also packing deep thought and meaning into his tunes. His latest album is ‘Animal Kingdom’ featuring songs such as ‘Hug all Ur Friends’ and ‘Boys Will be Bugs’ – the lyrics from which you may recognise from a tik tok trend. The curly-haired singer has also created previous albums, one of them being ‘Lemon Boy’ with the title track of the same name. His Instagram is @lemon.socks, where he posts pictures of his cat Fig and upcoming tour dates.

Girl In Red is a twenty year old Norwegian singer whose music has become more and more popular by the day; her pop songs giving a very rustic feel, sending early 2000s indie vibes. Her music tells stories unlike most, stories such as a ‘Dead girl in the pool’. She is also a big ambassador for the LGBTQ+ community, putting forward a very strong equality message with her creative music videos and song lyrics. Her songs all have their own sound, her unique voice and music video style gaining her popularity from all over. Her songs are also easy to relate to, such as ‘I wanna be your girlfriend’, an upbeat song with meaningful lyrics behind it. Her Instagram is @girlinred

Nothing But Thieves is an alternative rock band from Essex, UK. Comprised of five members, this ‘emo’ group creates hard hitting music, filled with emotional lyrics and meaningful sounds. If you’re into music with the likes of Twenty Øne Piløts or Panic! At The Disco, then this is the band for you, their songs ranging from soft and mellow to proper head-bangers. Whilst this band isn’t as fast rising as others it’s certainly making its way there. The band’s most recent album, ‘Broken Machine’ contains songs such as ‘Particles’ and ‘Amsterdam’ one of which accumulated fourteen million views on its music video. The hard hitting lyrics are certainly something to listen to. Their Instagram is @nothingbutthieves.