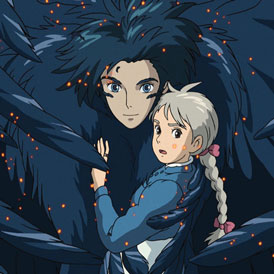 In case you’ve never heard of Ghibli and are wondering what on Earth the word means: Studio Ghibli is a Japanese animation film studio best known for its anime movies. I’ve been watching Ghibli movies since I can remember. The beautiful hand drawn backgrounds, unique animation style, and mesmerising soundtrack have always captivated me.

While there is a vast amount of Ghibli movies to date to choose from, my favourite remains to be Howl’s Moving Castle (2004). The film is loosely based on the book of the same name by English author Diana Wynne Jones published in 1986. While the book focuses on challenging class and gender norms, the film focuses on love, personal loyalty, and the destructive nature of war. The story is set in a fictional world where both magic and early 20th century technology are prevalent, creating a steampunk vibe that adds to the quirkiness of the movie.

The film follows the story of a young milliner named Sophie after she is turned into an old woman by a witch. She then encounters a handsome, charming wizard named Howl and gets caught up in his resistance to fighting for the king. However, as so often with Miyazaki films, it is the backdrop that gives the film its edge as the story plays out during a time of war. Miyazaki publicly stated that the film was a reaction to the widely unpopular Japanese involvement in the Iraq War, as the characters waging the war admit that the war is idiotic. This setting makes the love story between Sophie and Howl even more powerful as they fight together against tyranny.