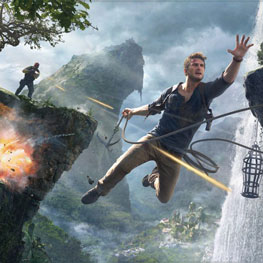 It has been over 3 years since Uncharted 4 was released… is it still worth it? Absolutely! If you haven’t played it yet, it is a must, especially if you are a fan of action-adventure games and have played the 3 previous games (all remastered for PS4 too!). Uncharted 4 is full of smooth combat, sleek parkour, amazing graphics and plenty of puzzles.

Nathan Drake returns to us for a final, unforgettable treasure hunt. It is an exciting and funny, yet emotional at times, game, due to its ever fantastic story line which is always present in the Uncharted series. While Nathan is trying to live a normal, retired from treasure hunting, life with wife, Elena Fisher, his presumed-dead brother, Sam, finds Nathan. Sam presents him with a proposition of returning to his old life that he finds difficult to refuse.

As I mentioned earlier, Uncharted 4 is incredibly slick and polished. Including the climbing, the new use of the grappling hook to swing on and off cliffsides and the sliding down steep paths of gravel which is totally unrealistic but very fun too. Naughty Dog definitely expanded the terrain, making the game much more explorable compared to its predecessors. But, it’s not anywhere near open world and there aren’t huge benefits to exploring everything apart from the occasional collectible treasure or alternative route to the next destination.

There are definitely more opportunities to stealth around the mercenaries (enemies). There are many hiding spots such as long grass mainly used for silent takedowns. I also am a big fan of being able to aim at enemies and tag them to track them and their movements. If you ever walk into the enemies line of sight, you are not detected immediately, you probably have a few seconds to find a hiding place before they realise it is you (Nathan). If they do realise it is you though, you can try and lose them and hide again, and the process starts all over again.

Uncharted 4 brings a great end to the series that feature Nathan. The brilliant send-off basically confirms that Naughty Dog won’t make a 5th of the series, but don’t worry, we have the ‘Lost Legacy’ and probably other titles under ‘Uncharted’ to come!