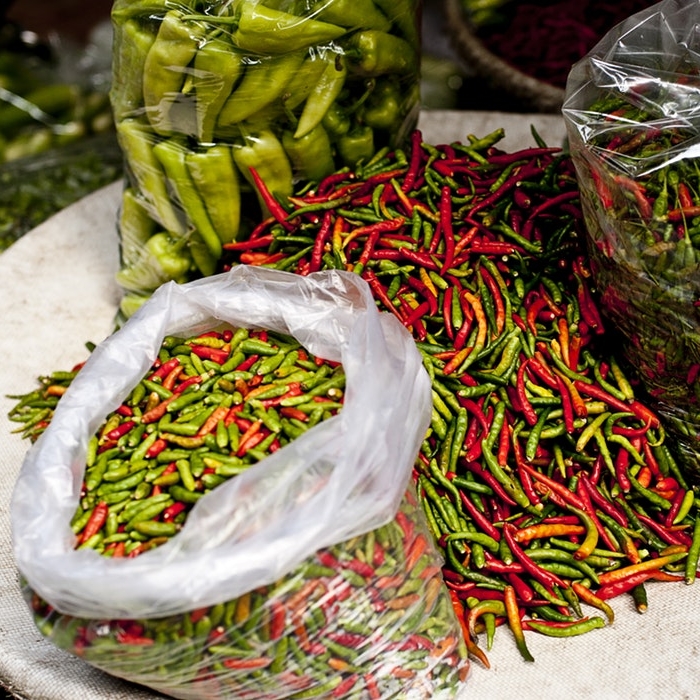 August sees us still languishing in the heat (maybe not always in England!), and what better way to celebrate than to match that heat in our food. No I’m not talking about temperature, I’m talking spices, chillies and hot sauce! Spicy foods are my absolute favourite and August brings us a special day to celebrate.

August 19th is National Hot and Spicy Food Day, and I definitely know I will be celebrating in style! This is a US national day, however I feel like there is no reason why us Brits can’t celebrate alongside them! Now not to get confused between the ‘Hot’ and ‘Spicy’ parts of the day – they class items such as wasabi and horseradish as ‘Hot’, and peppers an chillies as ‘Spicy’.

• Chilli peppers are actually good for you! They contain a high number of vitamins and are also proven to help lower cholesterol. Now that is worth the numb tongue feeling!

• Chilli peppers can also help you lose some pounds, by boosting metabolism rates and dismissing your cravings for fatty foods!

• Although they don’t seem it; hot mustard, horseradish and some mustards are in the same category of hot and spicy food. Though they may not have the same impact as a jalapeño!

• The most effective way of easing the burn of a spicy food is with cold milk or yoghurt. People mistakenly drink water, which won’t mix with the oil and will cause the heat to move to other parts of your mouth instead.

• The chemical that is found in peppers that causes them to be hot, Capsaicin, isn’t found in any other plant and is so distinct that humans could identify it, even if it were in a concentration as little as one part per million.

Now spices don’t just have to be in savoury food. A lot of crazy people out there enjoy a little spice in their desserts and sweet dishes. A lot of sweet ingredients such as cocoa and milk based dishes actually complement the hint of spice and heat.

The first interesting dish is Jalapeño Cheesecake Ice Cream. Now this may sound strange, but the jalapeño and the ice cream work together really nicely. The dairy in the dish helps to counteract the jalapeno spice, so instead of leaving you gasping for air it is leaving you with the fresh jalapeño taste. The cheesecake adds a sweet cakey texture and all these components create a unique and tasty dessert!

Now if you’re a peanut fan, this one may appease you! Chocolate-Covered Habanero Peanut Brittle is a great little snack with a big flavour. Again, the chocolate and habanero work hand-in-hand, alongside the touch of peanut. Brittle is a great snack to pick at and is equally as tasty!

There are so many sweet dishes that you can add a touch of spice or heat to, and it transforms it into a whole new flavour. How about you try it and celebrate National Hot and Spicy Food Day in style! A touch of chilli here and a drop of spice there and you can have your tastebuds tingling.

Why is Spicy Food Spicy?

Now if we’re going to get very scientific, there are some interesting facts as to why spicy food is actually spicy.

That tingling, hot feeling that usually comes from chilli peppers, but sometimes from horseradish (a root) or mustard. There is a secret ingredient hiding in the shadows, that is causing this feeling.

Their seeds have capsaicin (cap-SAY-uh-sin), which is an irritant to us. We feel this irritation like a burn. That is what we associate with a ‘spicy’ feeling!

Pepper plants are trying to protect themselves—and make more pepper plants. This is where Capsaicin has it’s shining moment. Birds and animals eat the peppers and then dispose of them all over the ground. The seeds then grow in a new place. But when bugs eat the peppers, they leave little holes in the fruit. Fungi enter the holes and eat the seeds, stopping them from growing. Capsaicin protects the seeds from the fungi. Meaning they can grow and grow! However this does mean creating a spicy, tingling taste when we eat the delicious food.

A lot of people think a little burn makes food taste better. But a lot of others don’t. Eating food that’s too spicy for you can hurt your mouth and your stomach. So it’s important to know your peppers before you eat them. The Scoville Scale orders chilli peppers from hottest to mildest. The hottest peppers can be more than 2 million times spicier than the mildest. Now that’s hot!

Now, I’m sure we’ve all been there when we’ve bitten off a bit more than we can chew, especially when it comes to spicy food. I, for one, have always thought I can handle a lot of heat and spice but sometimes I push it too far! Here are the best ways to soothe the burn after getting a mouthful of too much spice.

I think this is a classic when it comes to battling a fiery tongue. Milk is excellent for relieving the effects of spicy foods, as it contains ingredients that help break down the spicy components of chillis and peppers.

Now this is one that isn’t as popular, however taking a big swig of lemon, tomato or orange juice can help neutralise the pH level of the spicy food you’re eating, helping to cool off the burn!

3. A sprinkle of sugar or honey

Although this may sound strange, sprinkling a drizzle of honey or sugar onto your tongue after feeling the heat can help to neutralise the spiciness as well. Alongside helping to soothe the heat, it also leaves a rather pleasant sweet taste in your mouth!

As disgusting as this sounds, apparently swallowing a teaspoon of olive oil helps to tackle the spiciness of the foods. I can’t say I’ve ever personally tried this technique, however the combination of fat and oil helps to soothe the burn.

If you really can’t stand the thought of the olive oil, then peanut butter has similar qualities and can work as a good substitute!