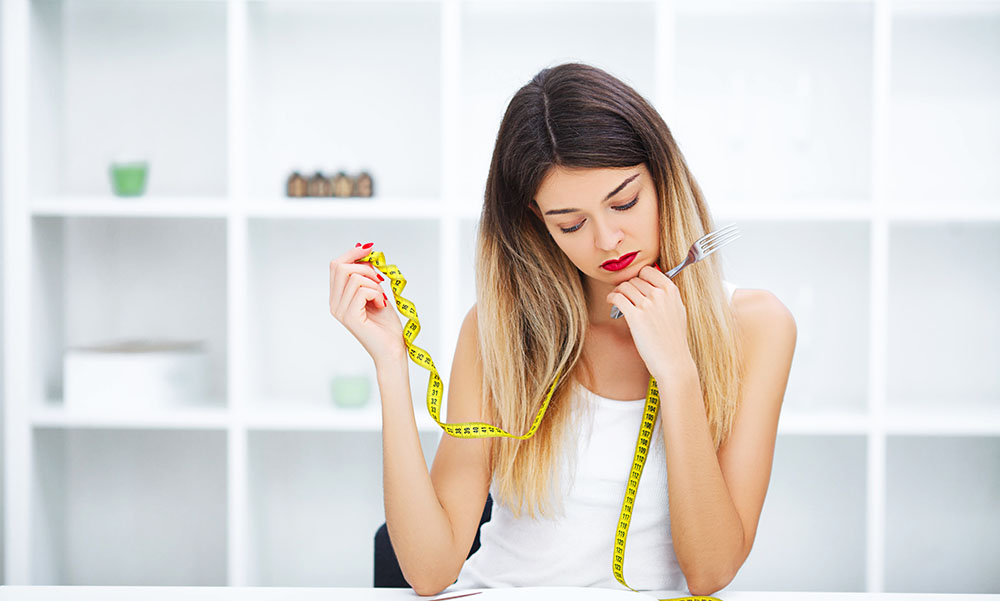 The ‘One-Size-Fits-All’ Approach to Eating Disorders

Speaking as someone who has been diagnosed with a range of eating disorders, including Anorexia, Bulimia, and Binge Eating Disorder, I can attest to the fact that, if your symptoms fail to fit neatly into an eating disorder ‘box,’ your chances of being deemed eligible for treatment are highly unlikely.

The ‘one-size-fits-all’ approach, to which I am referring, can be felt by numerous individuals who, upon meeting a mental health professional, are told that they are “not skinny enough” to receive treatment. Either that, or their Body Mass Index (BMI) does not qualify them for therapy.

Herein lies the crux of the matter. For too long, we have regarded eating disorders as a skinny white girl disease. Likewise, we have been fed the idea that you can tell, simply by looking at a person, or by inspecting the weight on the scales, whether he or she is in the midst of a chronic illness such as anorexia.

The reality is, a person does not have to be emaciated in order to be suffering from an eating disorder. I myself am not emaciated and yet, there is no denying that my bulimia is as prevalent as it was 4 years ago, a time when I did fit the ideal eating disorder ‘profile’.

In short, by way of denying treatment, often as a result of a heavy reliance on an outdated system of measuring health (BMI), mental health professionals actions can validate feelings of self-loathing on the part of the patient.

No matter how regretful a physician may be, when delivering the news that an individual is ineligible for therapy, the string of words “you are not skinny enough” should never be voiced.

Ayla is 21-years-old and is studying Screenwriting & Film Studies. Her favourite poet is Sylvia Plath. Ayla decided to get involved in ‘Student Life’ to share her experiences in a hope that it will help and inspire others.

From childhood, it is drilled into us that we must eat our greens. That water is good for us. And, that we should get a sufficient amount of exercise to reduce our chances of obesity. But, what happens when this manifests itself too far?

Recognised in the 1990s, Orthorexia is not a topic that is often discussed; most people haven’t heard of it. To put it simply, Orthorexia is an eating disorder which is fuelled by an obsession to eat ‘cleanly’. Like any eating disorder, it does not necessarily manifest from an dissatisfaction with body image, but it can be about reigning back control. Orthorexia is all around us. Insta snaps of healthy food, diets on magazine covers, and ‘What I Eat In a Day’ videos that have become a trend in the YouTube community.

I became aware what Orthorexia was back in sixth-form. My friend started visiting the gym. I just thought she was adopting a healthy lifestyle. When you’re juggling school, doing something you can enjoy can be a great way to clear your head. But it got out of control. She would take days off school to go to the gym. She would do laps around the school during lesson hours. I think the moment it hit was when we were all having a night eating copious amounts of pizza. Instead, she brought along a fruit smoothie and Instagrammed it on the kitchen counter.

When everyone left, I approached the subject sensitively. My friend told me how she had been feeling, and said she knew she had a problem. She wanted to stop, but didn’t know how. It all made sense. The excessive exercising. The taking pictures of food whenever we went out to eat. Ordering the healthiest thing on the menu. Adding calories together on a calculator. Luckily, she got the help she needed, but it has taken a long time. Years later, I asked her why she felt the need to do those things. She said it was like her brain was screaming at her, telling her that if she ate something unhealthy she would make her body ‘impure ’.

She urged anyone to not suffer in silence, and recognise when a habit is becoming an obsession.

“It never occurred to me that I had an actual problem.”

What comes to mind when you hear the term ‘eating disorder’? Probably bulimia or anorexia nervosa; the two most common types of EDs in the UK.

It was this reason exactly why it never occurred to me that I had an actual problem with my eating habits. I wasn’t overweight, underweight, or binge eating in secret. I just figured I was really, really into eating ‘clean’. But when it started taking over my life, I knew something wasn’t quite right.

I’d always been a bit out of shape, and when I joined a gym and started seeing the positive changes eating healthily and working out had on my body, I grew more and more attached – and more and more obsessed – with it. When I started having stomach troubles, I saw a doctor and underwent several tests which eventually confirmed I was lactose intolerant. At that point, I cut dairy products out of my diet and I even started losing a bit more weight, which led me to thinking: what else can I do?

I started cutting other food groups out of my diet: first gluten/wheat, then sugar, then carbs. I was at the point where my diet mainly consisted of chicken, rice cakes and vegetables. Every item of food I picked up, I would check the nutritional information of. I wouldn’t eat in a restaurant or takeaway without first finding the nutritional information online – and if it wasn’t available, I would sit staring at the menu wondering “what can I eat that won’t be ‘bad’ for me?” I avoided social events if they involved alcohol, fast food or buffets; my willpower was so low that I knew I would end up consuming something ‘bad’ and feeling guilty about it for hours, even days. Each day became a contest against myself with how much ‘better’ I could eat compared to the previous day, and any ‘slip up’ would make me feel low.

I eventually realised how it had taken control of my life and saw my GP who educated me on the term ‘orthorexia’. Orthorexia – although not clinically recognised as an ‘eating disorder’ in its definition – is treated as a form of anorexia or obsessive-compulsive disorder. I realised that my mental wellbeing was worth more than how I looked, and slowly my eating habits improved, to the point where today I am much more relaxed about what’s on the menu!