Once plastic gets into the sea, marine animals can mistake it for food causing toxins to infiltrate their body, mistake large pieces of debris for food like jellyfish resulting in them dying because they can’t digest it or become entangled in the debris & suffocate. Did you know, for example, that there are 5.25 trillion pieces of plastic debris within our ocean, according to National Geographic? The worst part? If we eat fish, then we could potentially be eating tiny parts of plastic called microplastic which could potentially have a serious impact on our health. But what can me and you do I hear you ask? 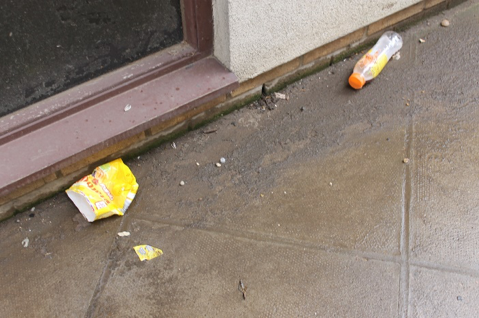 Well, one solution is to care for the environment and try to spread the word about the devastating impact that litter has on the ecosystems around us. That’s why I set up The Environment Club at my school to try to reduce litter (we have a massive problem with litter, as the photos show), and to spread awareness. Another is to make the materials we use biodegradeable so that they break down and don’t cause damage to the environment.

My school canteen has just changed their packaging from polystyrene containers to 100% compostable containers due to our club and have listened to our voices. A small success, maybe. But a big success for a small club. And this is why our success is so great.

Lots of small steps, grow into a larger action if lots of people follow suit. In other words, our club is like sowing a seed in the ground. If other schools did the same, wouldn’t the impact suddenly become larger as the plant grows? But there’s another solution.

If everyone stopped littering wouldn’t the world become a better place? Wouldn’t there be less litter everywhere? Indeed. And so, this is my challenge that I set you: either have the courage to start up an environment club, or take the simple step of rather than dropping litter on the floor, put it in the bin. Because, after all, we all have a duty to protect the Earth and we all have a duty to respect it.