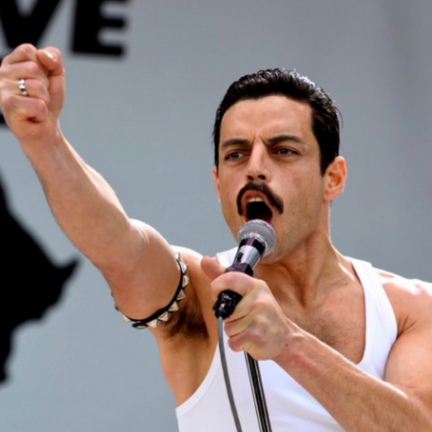 Tshequa is 16 years old and decided to get involved with Student Life as she has a passion for writing and aspires to have a career in journalism/media. She is currently studying her A Levels at Northgate Sixth Form.

Bohemian Rhapsody is a biopic film based on the life of Freddie Mercury and Queen from their formation up until their iconic set at Live Aid in 1985 in Wembley Stadium. Having grown up listening to Queen, it was amazing to see how they would have been as a band including Freddie and to gain an insight into how they all contributed to making Queen’s masterpieces. Rami Malek (as Freddie Mercury) did a great job of capturing the charisma that Freddie always had. It was also impressive how they managed to recreate Live Aid with such precision, even down to the exact gestures of all band members. These scenes beautifully tied together the story, leaving a nostalgic note for Queen fans.

Although the movie has been criticised for falsely portraying Freddie’s sexuality, I think that it was significant that they emphasised the importance of Freddie’s heterosexual relationship with Mary Austin (Lucy Boynton). Mary knew Freddie in a way no one else did and stood by him throughout his struggles with fame, his sexuality and his fatal battle with AIDS. Admittedly his main homosexual relationship with Paul Prenter (Allen Leech) was portrayed in a negative light with Paul causing Freddie to become distracted from music and his ‘family’ (the band), however the film showed how Freddie eventually found happiness with his last partner Jim Hutton (Aaron McCusker).

Again despite not going into too much detail about Freddie’s heritage and family history, it was touching to see the scenes towards the end where Freddie’s father finally accepted what he had become, rather than what he had aspired for him to be (a ‘proper’ job) sitting down to watch the Live Aid performance after Freddie reiterated his wise words “good thoughts, good words, good deeds”.

The movie made me very emotional at some points, particularly towards the end which showed the band uniting after Freddie’s diagnosis. Most of the cinema emptied out slowly at the end with many staying till the end of the credits, highlighting how much this movie means to so many people. I’d recommend this film to anyone whether you are a Queen fan or not. From energetic live shots to personal moments exploring Queen’s life behind the fame, Bohemian Rhapsody was everything I hoped it would be – flamboyant, fantastic and very Freddie.