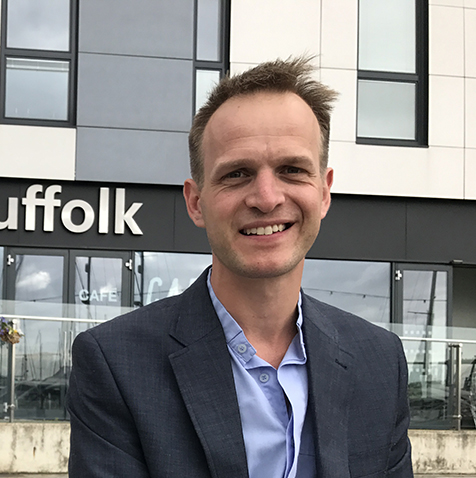 Tom Rout is vicar of the Ipswich Waterfront Churches (St Helen’s, Holy Trinity and St Luke’s) and Anglican Chaplain to the University of Suffolk and Suffolk New College. He is married to Nicola and father of 3 young children.

Many people like to start a new year by making a resolution. A few brave souls may even make more than one!

Resolutions can be made for all sorts of things. Sometimes they’re relatively simple lifestyle changes – to do with diet or exercise. “I must eat less chocolate, cut out cigarettes, limit my alcohol intake, burn off the weight I put on over Christmas.” Sometimes they touch our character, our moral fibre. “I’m going to give to charity. I’m going to cut out swearing and bad language. I’m going to reconnect with the church / temple / mosque. I’m going to stick to the speed limit.”

On one hand we take this New Year rite incredibly seriously… but at the same time resolutions have become something of a standing joke. We all know, the resolutions we solemnly make on New Year’s Eve seldom see the end of January. Some readers will already know what it feels like to have broken their New Year’s Resolution!

The resolutions we make are jolly hard to keep. Why so hard? Because we’re essentially trying to change ourselves, from the inside out. We’re fighting the habits and attitudes of a lifetime. We can end up feeling like Sisyphus the king of Ephyra who, in Greek mythology, was forced to push a giant boulder up a steep hill knowing it would always come tumbling back down again.

From that point of view, it could be argued that Resolutions are the worst way to start a new year. We’re setting ourselves up for a fall – and accompanying feelings of failure and self-loathing. That’s why some avoid making them at all!

I believe such change is possible, but that it comes not from the inside out… but the outside in. So, the question this year for me is, not what am I giving up or taking up, but who is influencing me, and teaching me, and putting truly life-changing thoughts and ideas into my life? As a Christian, I look to Jesus, who didn’t expect people to fix themselves, but shared his life-changing teachings and ideas with moral failures and resolution breakers.

Wishing everyone a prosperous and happy 2018.